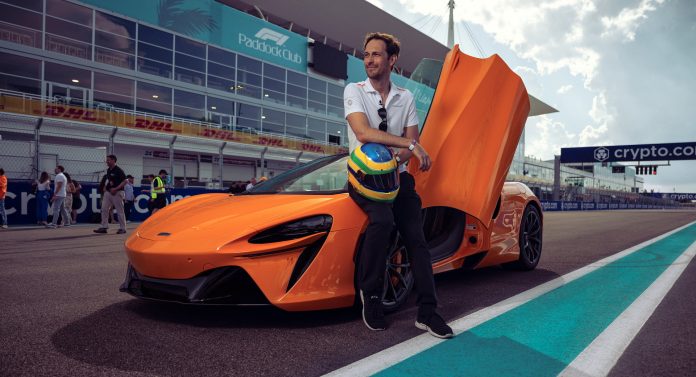 The Senna name goes hand in hand with Formula 1, with three-time world champion Ayrton Senna being considered by many to be among the greatest drivers of all time. 31 years ago, Ayrton won his last US race driving a McLaren at the 1991 Phoenix Grand Prix. With the inaugural Miami Grand Prix, the latest race to be held in the US, going down this weekend, McLaren decided They will celebrate the event by having Bruno Senna, former Formula 1 driver and Ayrton’s nephew, take their new Artura supercar for some of the all-new circuit laps.

In addition to introducing a second US race on the F1 calendar (soon there will be three with the addition of the Las Vegas GP next year), the stunt also celebrates Artura’s debut in North America. The release of the car was originally scheduled earlier, but the lack of chips led to the postponement of its launch.

Now Artura is finally here, and we’ll watch Senna harness all 671 horsepower (680 PS / 500 kW) of his V6 hybrid power as he makes his way around the 3.36-mile (5.41 km) circuit, which includes 19 corners, three DRS zones, and some interesting geographies Extremely. Some of this includes a section that runs down a highway as well as sections adjacent to Hard Rock Stadium.

“It was really amazing to be able to propel the McLaren Artura around the new dynamic and flowing Grand Prix circuit in the heart of Miami,” said Senna. “The Artura is a car that continues to give, especially on the track; it’s smooth and polished but with an aggressive edge that’s waiting to be discovered as you use the e-engine with its powerful V6. It’s predictable and fun – the perfect ride for a Grand Prix weekend.”

There has been some criticism about the fact that this race is technically being held in a parking lot. However, the more information we get about it, the more it looks to be a good track. However, regardless of any runs made in the simulator this circuit will be brand new to all the drivers racing this weekend so it should be absolutely fantastic.

Assassin’s Creed will celebrate 15 years of a special event