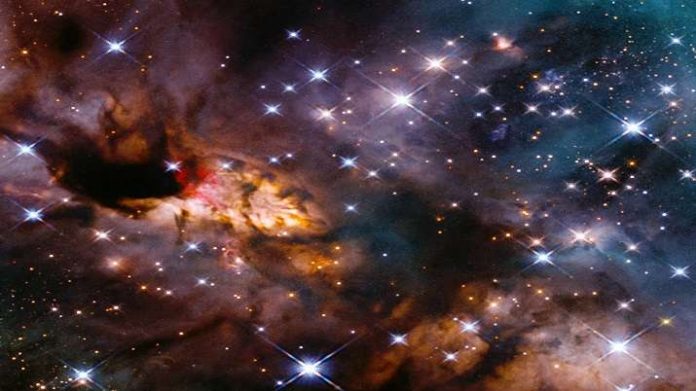 The Hubble Space Telescope captured a stunning view of the shrimp nebula floating in deep space. The Prawn Nebula is a huge stellar nursery located in the constellation Scorpius, about 6000 light-years from Earth.

Although the nebula spans 250 light-years and covers an area four times the size of a full moon, it mainly emits light at wavelengths that the human eye cannot detect, making it very faint to viewers on Earth.

“Hubble’s view shows a small section of the nebula in visible and invisible infrared light, capturing dazzling details of the nebula’s structure, including bright regions of glowing gas,” NASA said in a statement.

The Shrimp Nebula, also known as IC 4628, is an emission nebula, meaning that its gas has been activated or ionized by the radiation of nearby stars.

Radiation from these massive stars removes electrons from hydrogen atoms in the nebula. When the excited electrons return from a higher energy state to a lower energy state by recombining with hydrogen nuclei, they emit energy in the form of light, causing the nebula’s gas to glow.

The Hubble Space Telescope image was taken as part of a survey of massive and medium-sized “protostars,” or newly forming stars.

Astronomers used the infrared sensitivity of Hubble’s Wide Field Camera 3 to search for ultraviolet ionized hydrogen in protostars, jets from stars, and other features.

Read also: NASA has launched the DART spacecraft that will deliberately collide with an asteroid. Here’s why

Read also: NASA is looking for ideas for a nuclear reactor on the moon