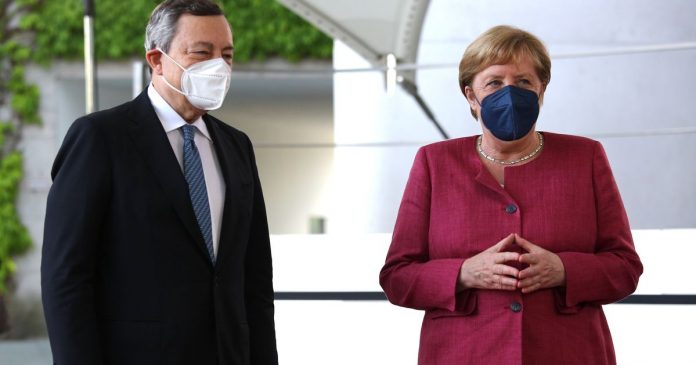 BERLIN, GERMANY – JUNE 21: Italian Prime Minister Marion Draghi arrives for talks with German Chancellor Angela Merkel at the Chancellery on June 21, 2021 in Berlin, Germany. The two leaders will meet ahead of the European Council summit scheduled for June 24-25. (Photo by Omar Messinger/Getty Images)

In the face of the deteriorating situation in Afghanistan and in the context of international contacts initiated on the crisis, Prime Minister Mario Draghi had a telephone conversation this morning with German Chancellor Angela Merkel.

During the interview, the humanitarian protection of those who cooperated with Italian and German institutions and the most vulnerable groups, starting with women, were discussed. It also discussed potential initiatives to be adopted within the European Union, the Group of Seven and the Group of Twenty in favor of the stability and protection of human rights and fundamental freedoms achieved over the past twenty years.

Today, Angela Merkel held telephone talks on the worsening crisis in Afghanistan with British Prime Minister Boris Johnson and French President Emmanuel Macron. In addition, the Chancellor also spoke with the United Nations High Commissioner for Refugees, Filippo Grandi. The spokesman said further talks are expected with heads of state and government of other countries in the region around Afghanistan.