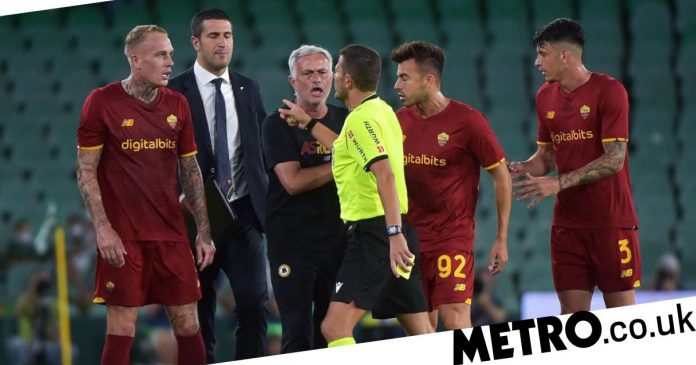 Jose Mourinho became angry during his pre-season friendship at his new club Roma and was sent off after entering the pitch.

When the referee sent him out, Mourinho rushed to the ground to express his displeasure.

It all starts with Benito Willamarine! ð ?????? Strange goal for Bettis ð ?? Angry complaints from Ro Roma that he was not denied a ball ð ?? ?? Pic.twitter.com/er5wnyzq7t

Things went from bad to worse as Gianluca Mancini was sent out before Rick Carstarp got the red.

Betis scored from Rodrigo and Naples Fekir 51 minutes later to stop an entertaining encounter at 2-2, with Eldor Shomurotov and Mancini scoring for Roma.

Bellegrini, Mancini and Karstarp were sent off in the 20th minute, while Mourinho was also sent to the stands.

Christian Dello and Robber both scored in the final 10 minutes, Roma leaving the pitch with eight players and no manager.