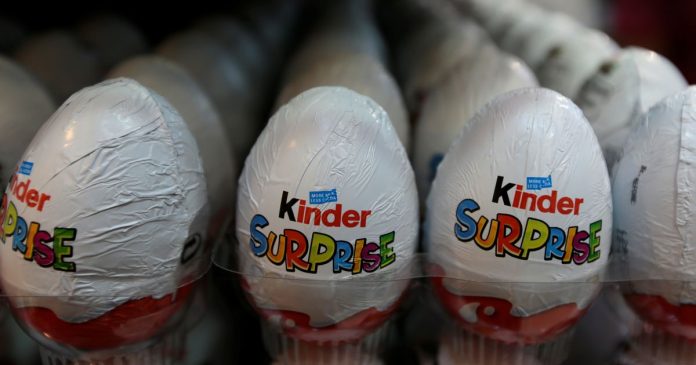 Ferrero has announced a preventive recall in Switzerland of Kinder chocolate products suspected of being responsible for a string of salmonellosis cases in Europe. However, no cases have been detected in Switzerland.

The list of affected products has been published On the website of the Federal Office of Food Safety (OSAV), I learned RTS on Wednesday evening. People who have purchased these products are asked not to consume them and not to eat them Contact Ferrero.

The Italian company stresses that consumer protection is its “top priority” and specifies that none of its products have been tested positive for salmonella at this time.

Following this precautionary recall, the Volg chain pulled chocolates from Prima, Landy and Topshop stores, as well as gas station stores, on Wednesday.

Many major brands, such as Migros, Coop or Aldi, have already removed Kinder products from their shelves. Coop has even announced several product recalls.

In an interview with the Forum programme, Pierre Schaller, a food science engineer and nutritional health coach at GastroSuisse, spoke of “serious flaws” in the company’s control process.

You should know that in Switzerland, the examinations are carried out by FSVO, by cantonal chemists, but these samples relate primarily to products of animal origin. For the rest, it is the companies themselves that do the verification themselves, as is also the case in Europe elsewhere.

>> Listen to Pierre Schaller’s interview on the forum:

Dozens of cases in Europe

Cases of salmonellosis, which appear to be linked to Kinder products made at the factory in Arlon, Belgium, are increasing rapidly in Europe. The first case was discovered on January 7 in the United Kingdom, and since February 17, infections have been detected in several countries.

A spokeswoman for the British health authorities told AFP on Tuesday that 63 cases of salmonella had been recorded in its territory.

On the French side, 21 patients were reported on Tuesday by the Pasteur Institute’s National Salmonella Reference Center, 15 of whom indicated that they had consumed the Kinder products in question, according to French Public Health, which specifies that eight people were hospitalized, but then returned. to their homes. The average age of cases is 4 years.

The European Food Safety Authority (EFSA) said Monday that a total of 105 cases of salmonellosis have been linked to an almost certain degree to Ferrero products. Sixty-three cases have already been definitively linked to chocolate products in the UK.