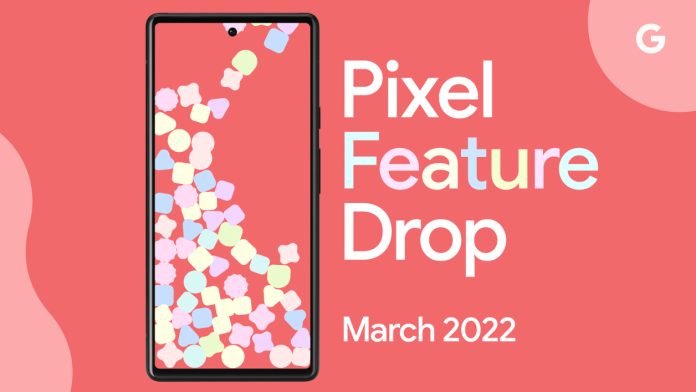 Google has just announced the imminent rollout of new features in its Pixel smartphones. “Pixel Drop,” as the Mountain View company calls it, should start arriving from the Pixel 3a to the Pixel 5a (5G) now.

This update is supposed to arrive on the Pixel 6 and Pixel 6 Pro shortly, in the month of March.

For this update, Google is introducing a very practical function that should change everyone’s habits regarding phone calls. automatic captioning system Live Caption, From Google, they can now be used directly during a call.
Thus everything that the interlocutor says is reproduced in real time on the smartphone screen. And for those who don’t like talking on the phone, it’s even possible to enter your answer by typing it directly on the device’s keyboard, direct explanation Then read it to the reporter.

When you send a message in Google Message, you can now turn your words into stickers. how ? Simply thanks to the Gboard keyboard. A simple happy birthday sent in a message can thus be transformed into a colorful poster that repeats what you have written word for word. Be careful though, the functionality is currently only available to users who type in English (US).

Another novelty, you can now watch YouTube with others through the Google Duo video calling app.

A tool to monitor everything

This update is also an opportunity for Google to launch a new widget, In one look Which allows you to gather your smartphone’s most important information in one place, in particular the Pixel’s battery level and the Bluetooth devices connected to it, or a reminder inviting you to deactivate the alarm the day before a public holiday.

Occupation night sightIn other words, the Pixel camera’s night mode can now be used directly in the SnapChat app. Google has chosen to integrate it to allow users of the social network to enhance their shots when in low light conditions. The option is available on the Pixel and Pixel 6 Pro, under the SnapChat app’s Low Light Mode.

Samsung is developing a smartphone that never existed before