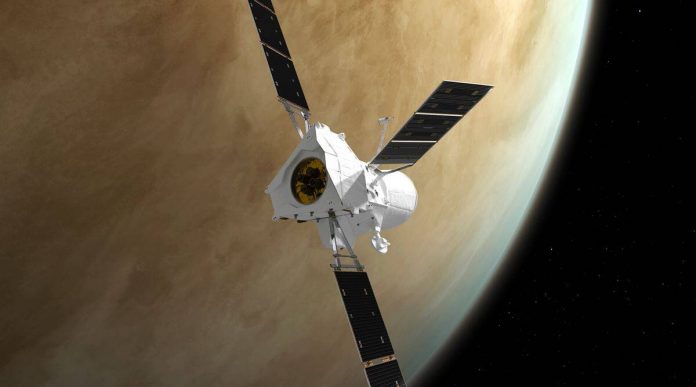 Two spacecraft are set to pounce on Venus within hours of each other this week, using the maneuver to do some extra science en route to their main mission at the center of our solar system.

The European Space Agency’s Solar Orbiter, in collaboration with NASA, completed a flyby of Venus early Monday, using the planet’s gravity to help set it on a path to observe the sun’s poles.

In case you weren’t up as early as us this morning Tweet embed completed the second # Venus Flybe Before breakfast 😉 Next: Tweet embed! We’ll have lunch Tweet embed chat with Tweet embed to hear more. Listen here at 13:00 CEST https://t.co/T8x6G199xV pic.twitter.com/nBS8Zs1Uj

About 33 hours later, the European-Japanese BepiColombo spacecraft will approach Venus in a maneuver designed to help it slow sharply and safely steer it into Mercury’s orbit in 2025.

“Without the flyby, we wouldn’t be able to reach our target planet,” said Elsa Montagnion, BepiColombo’s director of spacecraft operations. “The energy required to enter Mercury’s orbit would be prohibitively expensive in terms of fuel.”

⏳ We are counting down to # Venus Flybe On Tuesday, we put on our first course #Mercury Meet in October! We’ll make six # Mercury In total, before entering orbit in 2025. https://t.co/kWLD5OYGej pic.twitter.com/NOd3j2IMoF

Both probes have many scientific instruments on board, some of which will be used to get a closer look at Venus as they pass.

It will add the measurements to those taken by the Japanese probe Akatsuki, which is already in orbit around Earth’s hottest neighbor. NASA and the European Space Agency plan to send three more missions to Venus by the end of the decade.

T1 launches a League of Legends coach on Daeny and Zefa