Persia Digest
Home World Hu Jintao, what happened to get the former Chinese president out of... 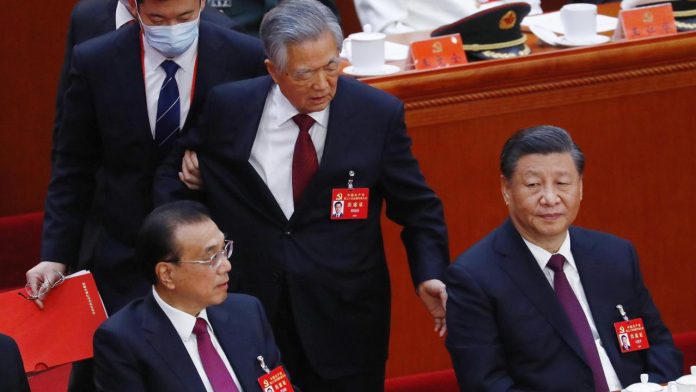 New video released by Singapore TV station, asia news channel, in various light of what happened on Saturday, October 22, at the conclusion of the XX Congress of the Chinese Communist Party (CCP). China’s official Xinhua news agency reported that Hu Jintao’s unexpected exit was caused by health problems, but photos released on Tuesday show new insight into what happened. They do not completely deny the official line that the former president was sacked due to illness, but they point out that the package of documents in front of him played a role in the incident.

The video begins with Jintao’s neighbor on the stage of the Great Hall of the People, Li Zhanshu, taking a document from his hands and putting it back under a red hood, like the one in front of all the other senior executives, while arguing with Hu. .

Thread about the key moments:
1/ The current head of the Chinese legislature, Li Zhanshu, is seen taking papers from Mr. Hu’s hand, arranging them and returning them to the table, while leaning over and talking to him pic.twitter.com/UsZv6Kk5Ny

At first he leaves the documents in front of the ex-leader who looks confused. Then, perhaps worried that he would try to pull the document again, Zanchou pulls the stack of papers toward him and secures it with his hand.

Xi Jinping glances at the side of the stage, most likely asking for someone’s intervention, while a senior assistant approaches and talks to him briefly, before turning away.

Li Zhanshu continues to speak to Hu Jintao, while Xi looks straight ahead with an unsentimental look. The young assistant who will soon accompany him arrives on the stage, talks briefly with He and me, then goes and talks a little longer with Shi.

At this point, the movie shows the images we’ve all already seen. The aide takes former President Jintao by the arm to help him get up from his seat. Upon exiting, Hu tries to take Xi Jinping’s notes, which were between them on the table, but Xi raises his hand and grabs the papers.

It is unclear whether or not this was an actual political purge. In the video, Hu Jintao appears confused – which will confirm his alleged health problem – but at the same time does not seem to want to leave when asked to get up. Moreover, pictures of the incident have not been broadcast in China, and the name of the former president and that of his son, Hu Haifeng, have been blocked on the Internet, within the country’s large firewall. What is certain is that Hu Jintao’s exit has political weight and humiliating effect on the personality of the former president, while Xi Jinping came out strongly with what happened. Prominent on the stage, as they are now in Chinese politics.

“The Panshir also fell, Masoud fled.” But the resistance denies...