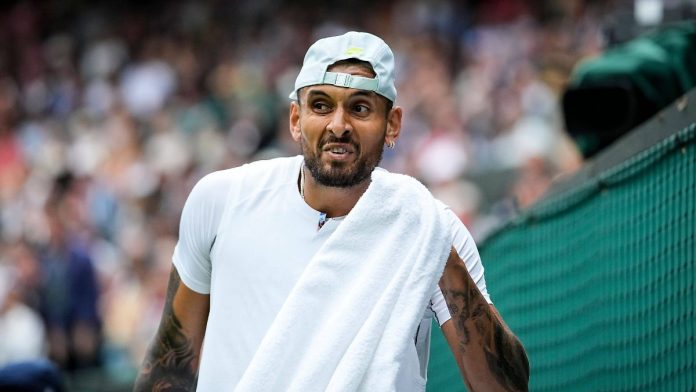 Nick Kyrgios is reaching new heights with his Wimbledon antics. The Australian describes the referee as a “disgrace” – and opponent Stefanos Tsitsipas, who scares himself into hysterics. Two legends are divided over tennis’ bad boy.

Even the discoverer of bad behavior on Wimbledon, the super-thug of the early 80s, suddenly doubts that this Nick Kyrgios is really an asset to the game. His behavior, John McEnroe said, was “sad and beautiful at the same time.” The reason for the “Bad Boy” debate was the ridiculous match against Stefanos Tsitsipas. Legend and BBC expert Martina Navratilova also condemned the rioters and criticized the disqualification for not being disqualified. “Boys escape more than girls,” he recalled of an earlier incident. In the 2018 US Open final, Serena Williams called the umpire a “liar” and a “thief” and had to forfeit a match.

The tennis world is divided: Many fans celebrate Kyrgios, who is outrageous and spits on etiquette and hallowed turf. Always a provocateur. The Fountain of Youth, considered the ideal savior of a dusty sporting scene that is truly white at Wimbledon.

Stefanos Tsitsipas did not celebrate Kyrgios. He hates him and the “circus” that Kyrgios puts on. After a memorable third-round fight that took on street-fight characteristics, including bullying and physical attacks, the loser said: “He has an evil side – when it comes out he can cause a lot of suffering and harm to those around him. .” Tsitsipas found himself a victim of bullying. “He bullies his opponents, he may have been bullied at school himself.” Nick Kyrgios laughed out loud as he appeared on PK in basketball villain Dennis Rodman’s shirt. “He threw balls at me, he hit a spectator and he threw the ball out of the field.”

“I didn’t do anything”

“I didn’t do anything,” Kyrgios said. In fact, he drove Tsitsipas mad. From the start, Kyrgios snarled his way through the match, lashing out at the line and umpire Damian Dumusois, and there wasn’t a break between rallies and service games without “bad boy” antics or chatter. Until Tsitsipas lost patience. After losing the second set, the Greek player threw the ball into the crowd in frustration without hitting anyone. The warning was more logical, a bad joke for Kyrgios, who wanted to be disqualified. He called the umpire and when he made no other decision, Kyrgios was shocked.

“Are you stupid?” He said to Dumusois: “You are a disgrace, you change the rules as you please.” In the ensuing exchange of blows, the kind the All England Club has rarely experienced since McEnroe’s days, Tsitsipas threw fuses as he repeatedly targeted Kyrgios, who later openly admitted his intentions: “He wanted to stop. It has to stop. . . . It’s not right. Somebody has to sit down with him and talk to him.” should.”

“We cannot accept this behavior”

Tsitsipas demanded consequences for all players. “Hopefully we can come up with something to clean up our game. We don’t accept, tolerate or allow this behavior.” He only got a sneer from Kyrgios: “He’s too soft.” Like all opponents at Wimbledon. His boys are truly “tough dogs” at home on the basketball court. Words that hurt the best tennis community. But the Wimbledon account on Twitter joined many fans in celebrating the great entertainment: “Unscripted. Unfiltered. Inevitable.” Sounds like a subtitle to a Netflix documentary — and it’s actually in the works. With a shoot at Wimbledon.

Kyrgios knows his worth. “It’s fantastic: everywhere I go, the stadiums are packed,” he said, to cheers from the audience. “And the media writes that I’m bad for the game. Obviously not.” It’s not sad or pretty, it’s true.