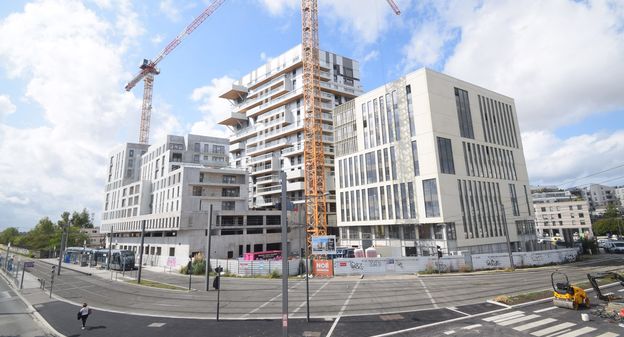 Wood in the sky of Bordeaux. The capital of the Gironde is the home of Hyperion, a five-building complex interspersed with a 17-storey tower 50 meters high. It is the tallest wooden tower in France. Around a concrete core and on a three-story plinth, the tower was built using a structure consisting of polished timber beams, laminate flooring, and timber frame walls (No. 304).

1,400 cubic meters of solid wood from Nouvelle-Aquitaine were used to build the tower, designed by Jean-Paul Viguier and partners. The timber for construction comes locally from regional forests and industrial production. This short circuit policy represents a new stage in the emergence of truly low carbon construction uses.”, attached to the architectural firm.

More than 1,500 components have been produced off-site under the leadership of Savare, a subsidiary of Eiffage that specializes in carpentry. A wooden frame wall, called Hypermob, was developed for the project. Already fitted with joinery while manufactured in the factory, it allows several levels of finishing in the cladding. For its part, Piveteaubois Vendée designed the facades and balconies. Eiffage Construction undertook the construction of several buildings, including the tower that houses 113 apartments. “Hyperion will store at least 1,400 tons of CO2 over its lifetime, a volume equivalent to nine years of energy consumed for a building of this size.”Confirms to the company.

Another tower under construction

The Bordeaux-Euratlantique Public Planning Foundation, which is responsible for the new district, launched a call for bids in 2015 for the construction of a wooden tower whose height would be unprecedented in France. The second project in operation, Silva, led by developer Kaufman & Broad, was finally selected – construction has just begun on the adjacent land. The project, which has 17 floors and is also 50 meters high, will include 20 thousand square meters of housing. Architect Egis is also involved, as are the Art & Build agencies and Studio Bellecour.

Pixium vision: a new board of directors