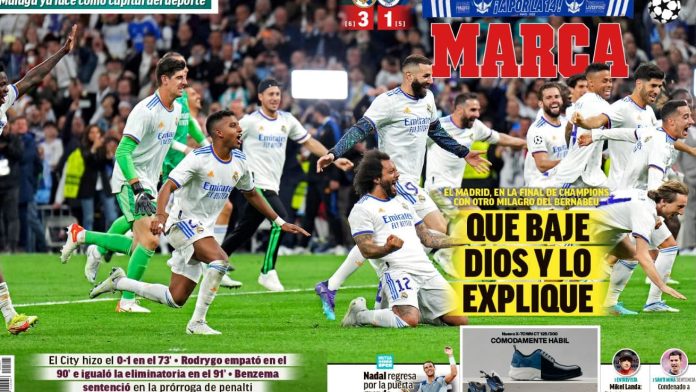 Real Madrid’s new achievement makes the press in Madrid so irrational that Marca is praying to God to understand how the Merengues managed to achieve a series of miracles.

Real Madrid is still in the Champions League final and it looks unreal. The club once again demonstrated why it is the boss of this competition (13 wins, a record) by ousting Manchester City in two minutes. But the match started very poorly since Mering led 1-0 at the start of stoppage time after losing the first leg 4-3.

Then Rodrygo emerged to score two goals in two minutes, to snatch the extra time. Karim Benzema completed the task by converting a penalty during overtime. Unreal yet City knew what to expect.

This Real Madrid proved in the round of 16, and then in the quarter-finals, that it is unsinkable. Each time, in front of Paris, and then Chelsea, he would find himself tied up, excommunicated, on the edge of the abyss, before being reborn and imposing his way. This impresses the football world and even the Catalan press. “Endless Day”, Mundo Deportivo’s title is in reference to the 1993 film with actor Bill Murray where everything is just an eternal beginning. “Unbelievable,” sports newspaper abounds.

The Madrid press lacks superlatives. So Marca invites the divine to understand the unfathomable. The title reads, “God will come down and explain it.” For As, this club comes from “another world”. The hugely popular sports show, El Chiringuito, sees the “Robin Hood” side of the Real team that have just launched three new rich men from European football in quick succession: PSG, Chelsea and Manchester City.

The Spanish press is now preparing to cover the club’s 17th Champions League final with the force of habit. And this feeling that nothing is suspicious of this team. Not even a two-goal deficit in the 90th minute.