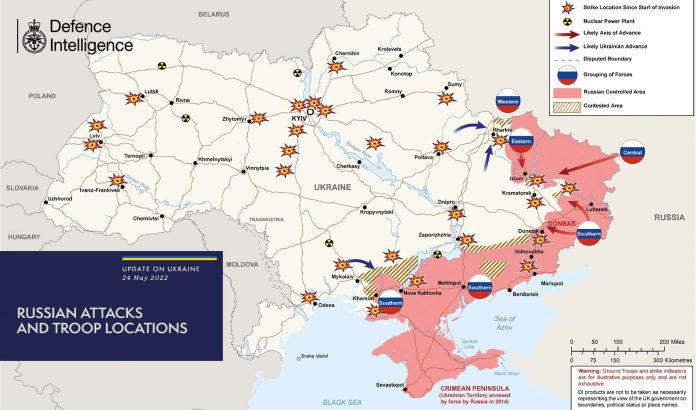 Yesterday (May 23, 2022) Russian forces attacked the city of Lyman. The city was at first subjected to intense artillery and air bombardment, and later saw the entry of troops from Moscow, who entered from the north. In these hours fighting is taking place inside the city and it is still too early to summarize the incident of the Russian attack, but it seems that the Russian forces are winning. If the city is successfully occupied, the Russians will find themselves controlling one of the roads connecting Lyman to Severodonetsk via Sivers’k (T0513), as well as the railway connecting Severodonetsk with Lyman, also via Sivers’k (an important Lyman railway hub). It is also reported that the Ukrainians withdrew from the city of Svyatohirs’k, located between Izyum and Lyman (about fifteen kilometers northwest of the latter).

To the south, in the Popasna region, Moscow troops approached the road connecting Bakmut with Leschansk-Severodonetsk (T1302), which is now under Russian artillery bombardment. Specifically, the Russians could have reached T1302 two kilometers north of Solidar, but the news is not confirmed at the moment. The capture of the two main communication routes to Severodonetsk by Russian forces would be a severe blow to the Ukrainian forces in Donbass.

The maneuver continues to encircle the Ukrainian forces located in the Severodonetsk region, a maneuver that seems to have found a renewed impetus, also thanks to the use of elite units (contractor Spetsnaz and Wagner) and the best combined use of ground forces, artillery and close air support (VDV sorties are constantly increasing and should be about 250 per day ). One of the decisive factors for the Russian offensive in this area was the capture of the city of Popasna, which is located at an elevated position compared to the rest of the area (about 240 meters above sea level, as opposed to, say, 100 meters from Solidar), and the Russians there and concentrated large quantities of artillery to strike with All surrounding areas support axes to advance in the direction of T1302. At this point in the Battle of Donbass, artillery plays a crucial role in supporting tactical maneuvering and suppressing Ukrainian positions.

Instead, in the north, in the Kharkiv region, where a Ukrainian attempt to break through in the direction of Vovchansk was rejected last week, the situation remained fundamentally unchanged, with the Russians retaining control of a buffer zone about ten kilometers from the border. , and with the Ukrainians who seem to have a bridgehead on the east bank of the Seversky Donets.

Finally, an update note on arms supplies to Ukraine: According to the announcement by the US Secretary of Defense, Lloyd Austin, Denmark will be willing to send an unspecified number of HARPOON Block II anti-ship missile defense batteries to Ukraine (Denmark) These missiles should contain no more than 2 batteries, each consisting of 4 launchers).