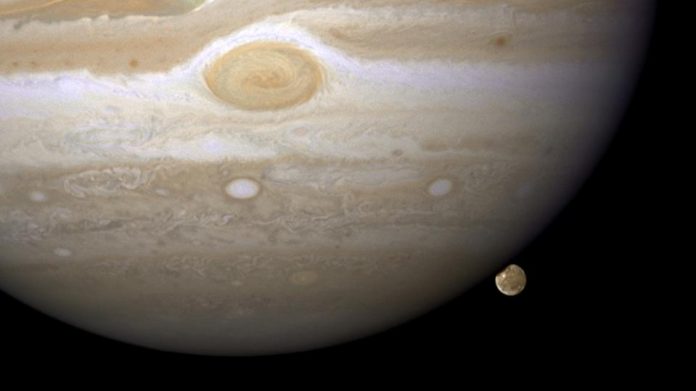 Scientists already knew that it is the largest natural moon of Jupiter and even the solar system, but Ganymede has not revealed all its secrets. The European Space Agency indicated, Monday, July 26, that the presence of water vapor in the atmosphere of this moon has now been proven.

The international team of astronomers behind this discovery published a study in the journal natural astronomy. Scientists say they’ve gone back to data collected by the Hubble Space Telescope over the past 20 years.

The presence of water on Ganymede was already known, but mainly in the form of ice. Some data also indicates the existence of the ocean, in a liquid state, 160 kilometers below the satellite’s surface, trapped between two frozen layers. Researchers believe that Jupiter’s moon contains more water than all of Earth’s oceans combined.

But since this ocean is underground, it cannot be the source of the water vapor detected in the atmosphere of this moon. According to the study published on July 26, it is rather the result of ice sublimation on Ganymede’s surface. Sublimation here determines the moment at which water passes from a solid state to a gaseous state.

AskedEuropean Space Agency (ESA), Lorenz Roth, of the Royal Institute of Technology in Stockholm, explains that this chemical reaction is “caused by thermal exhaust”. The team of astronomers he led discovered that, in fact, the temperature at Ganymede’s surface can, in some places, become hot enough to release ice to small amounts of water molecules.

Less than a year after the launch of the JUICE mission, led by the European Space Agency to Jupiter, these new elements are getting even more interesting. The space probe, which will reach the Jovian system in 2029, must fly precisely over three of the largest satellites on the planet: Callisto, Europa … and Ganymede.

The hidden face of the moon: what is this mysterious cube...