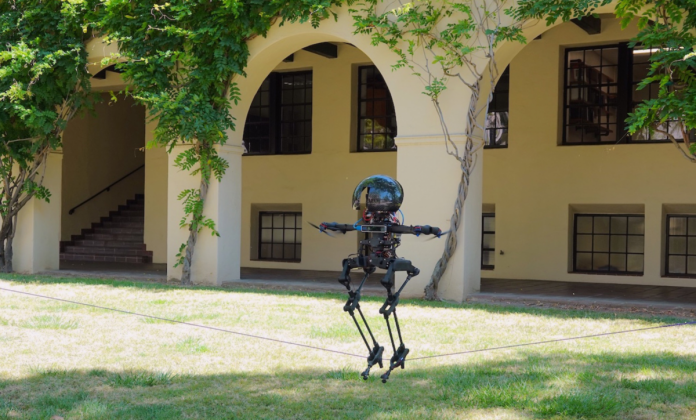 The newly developed legged robot can seamlessly switch between walking and flying. This makes it very cool, but it’s also kind of a little creepy.

His name is Leonardo, or Leo for short. The name is an acronym for LEgs ONboARD DrOne. This describes the futuristic device well, but the Leo is more than just a legged drone. Visually it reminds a bit of one of the scary toys from boy-next-door Sid from the first Toy Story movie, it’s just a very complex machine that no eight-year-old can put together in this way.

Leo was developed by Caltech engineers at the Center for Autonomous Systems and Technologies (CAST). Researchers have built the first robot to use multi-joint legs and a thruster to maintain complete control of its balance. By combining two modes of movement, the lion is very agile and able to perform complex movements.

“Nature has inspired us. Think about how birds can flutter and jump to navigate phone lines,” said Sun Joo Chung, correspondent author and professor of aerospace, control and dynamic systems, at Caltech publication. “When birds move between walking and flying, complex but fascinating behavior occurs. We wanted to understand that and learn from it.”

Legged robots are able to manipulate complex terrain structures in the real world using the same movements as humans, such as jumping, running, or even climbing. However, you are frequently hampered by the rugged terrain. On the other hand, flying robots easily navigate difficult terrain by avoiding the ground. But they also have limits. Above all, the high energy consumption during the flight and the limited payload capacity should be mentioned here.

See also  You can finally add games to your cart

Multimodal locomotion robots can move more efficiently through challenging environments than conventional robots by switching their available motion accordingly. In particular, Leo aims to bridge the gap between different domains of air and bipedal locomotion, which are not normally intertwined with current robotic systems,” says Kyunam Kim, a postdoctoral fellow at Caltech.

By using a hybrid locomotion that lies somewhere between walking and flying, the researchers get the best of both worlds in terms of locomotion. Leo’s light legs take the strain off the engines by supporting most of the weight. “Depending on the type of obstacles to overcome, Leo can either use walking or flying, or a combination of the two as needed,” says Patrick Spiller, co-lead author of the Science Robotics paper and a former member of Chung’s group currently at JPL, which Run by Caltech for NASA, like tightrope walking and skateboarding.

Leo is still a prototype that is supposed to show whether a two-legged flying robot is capable of performing tasks that would be difficult or impossible for ground-based robots and drones. In the future, a full-fledged version of Leo can be entrusted with complex and sometimes dangerous tasks. This includes, for example, inspection and repair of damaged infrastructure, installation of new devices in hard-to-reach places or support in the event of natural disasters or industrial accidents. It is also conceivable that such robots transport sensitive equipment on the surface of other planets. Under certain conditions, the agile one-legged aircraft can also be used for military purposes.

We’re simply not talking about his role in the robot apocalypse at this point. That can be very scary.