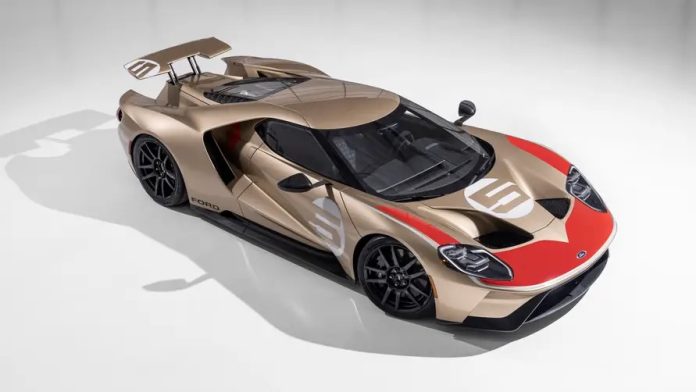 This is the Ford GT Holman Moody Heritage Edition, the absolute special edition Ford GT dedicated to one of the countless successes in competition of its GT40 predecessor. This celebrates the victory, or rather Ford’s hat-trick, in the 1966 24 Hours of Le Mans.

One question that might burn your lips: Who the hell is Holman Moody? It is actually a former American racing team founded by John Holman and Ralph Moody. The team that, at the request of Ford’s Le Mans Commission, spent eight days and 265 laps in January 1966 to complete Shelby American’s work on the GT40 Mk II, in 1965 dominated Le Mans at pure speed but fell for its lack of reliability.

Brakes, suspension, tires, all ground links are present. They even tried an automatic transmission. That hard work paid off when Ford finally beat Ferrari at Le Mans in 1966. Before returning to La Sarthe in 1967. Then the following year. Then a year later. Then… No, that’s it, and then it’s the turn of the Porsche 917.

But let’s go back to the Ford GT in a nutshell, the 2022 edition. This Holman Moody version is chambered in gold and red paint, in homage to the GT40 P/1016 chassis that served as a mule before the race at Sebring in March. 1966 (12) and then at 24 Hours of Le Mans in June (third). Everything is sprayed with No. 5 bibs, a bit of carbon fiber inside and out, plus Alcantara and gold accents in the cockpit.