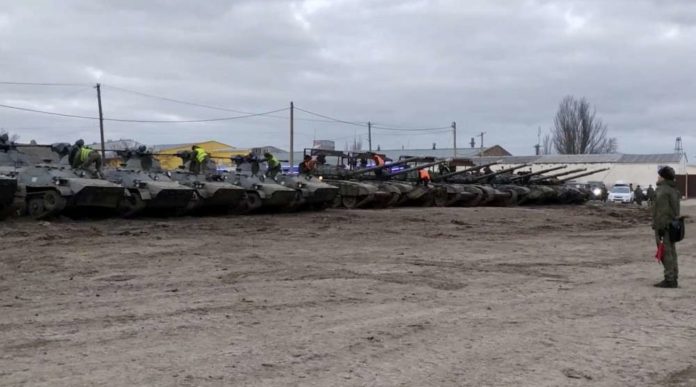 The Ministry of Defense said in a statement that “the units of the Southern Military District, after completing their participation in the tactical exercises, are heading towards their permanent deployment points.” At the same time, state television broadcast images of military units crossing a bridge linking the Russian-controlled peninsula to the mainland.

Borrell: Check the withdrawal of Russian soldiers from Crimea

And the head of European diplomacy, Josep Borrell, expressed his caution against the announcement of the withdrawal of Russian forces from Crimea, stressing the need to “verify” first. Commenting on the news on Radio France Inter, the EU’s high representative for foreign policy said that withdrawal “if it is undoubtedly true” would be a sign of relaxation. But, he added, “You always have to check.”

Von der Leyen, from Moscow now facts beyond words – “I think diplomacy did not say the last word, but now we have to see the facts in addition to the words.” Ursula von der Leyen said this at the plenary session of Strasbourg. And NATO has not yet seen clear indications of withdrawal.” Regarding gas, the EU Commission President explained: “We have considered all possible disruptions if Russia chooses to use energy as leverage and I can say that we are in this winter safely. With member states we have developed emergency measures that we can implement if we reach a full-blown crisis: more than 200 LNG ships arrive in Europe. But we must also invest to free ourselves from dependence on Russia for gas.”

Stoltenberg: “We see more Moscow troops coming” Doubts about the actual withdrawal also come from NATO Secretary General Jens Stoltenberg, who said that Russian forces “have increased, not decreased”: “We are closely watching what is happening. At the same time we record Moscow’s openness to diplomatic dialogue and we are ready in this sense, but we are not We are still waiting for Russia’s reaction to our written responses sent on January 26.”

Won’t Ratzinger be the only one? – Free daily