Persia Digest
Home science Windows 11: How to test my PC’s compatibility and determine if the... 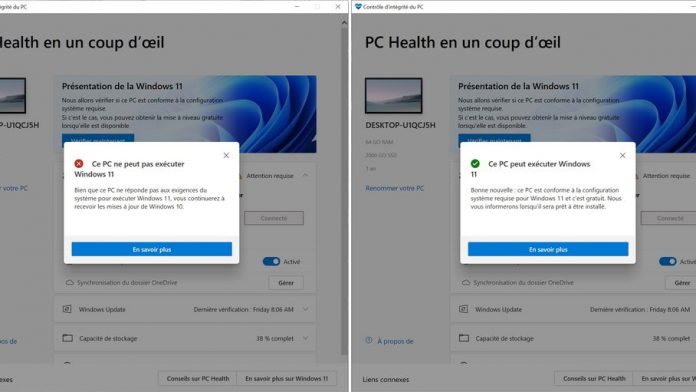 It was recently announced at a conference held by Microsoft, that Windows 11 will be officially launched next fall. First on new PCs, then update on PCs currently equipped with Windows 10 second. In the meantime, several beta builds will be offered on Microsoft Insider channels. A first beta will be available next week.

In the meantime, it is possible to test the compatibility of your Windows 10 PC with the new operating system that was known until now under the code name Sun Valley. Microsoft offers a tool for that To be installed on a Windows 10 PC. It is fairly basic, answering the question with yes or no. For example, the computer on which these words were written is declared incompatible, without further explanation. However, this one is modern and well equipped (Ryzen 9 5900X chipset, X570 chipset, 64GB of RAM).

A section in the Windows 11 hardware recommendations doesn’t give us more information: you need a 1 GHz processor, 4 GB of RAM, 64 GB of storage, and a DirectX 12 graphics card. The problem may come from “another, more difficult point to understand” .

So it is necessary to check if the computer takes advantage of TPM 2.0. Our colleagues fromInpact . devices, Related “A cipher unit that can store secrets and use them for authentication, encryption, and security.“To see if this is active, we can run Power Shell for Windows 10 in administrator mode and type ‘get-tpm’. The first line (TpmPresent) will give the answer. If this item is negative, it becomes complex for the layman.

In fact, it is then necessary to go into the BIOS of the motherboard to check if the function is present, and activate it if necessary. On Intel processor motherboards, the TPM can take the name PTT (unrelated to the predecessors of Orange and La Poste); On those of AMD processors, it can be TPM or fTPM.

On our motherboard for an AMD processor, for example, we had to activate the “Security Device Support” option to be able to activate the “AMD fTPM switch” option. After this manipulation, our computer is now seen as compatible. If all this will be simple enough for most technology enthusiasts, then we ask ourselves serious questions for the majority of users: determine if the motherboard provides the option, go to the BIOS and activate it … Since many manipulations the average user should not do this .

We’re now curious to see how this prerequisite will evolve and whether it can’t act as a curb on mass adoption of Windows 11 when it’s released, which, as we remind you, is scheduled for the fall of 2021.

If you are looking to see if your computer can run the new Windows 11 operating system, download and install the PC Compatibility Check Tool (Windows 11 Compatibility Tool).