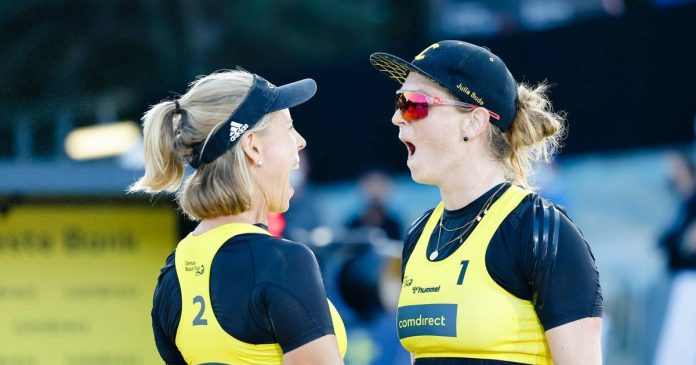 ROM German women’s teams got off to a good start at the World Beach Volleyball Championships in Rome.

Of the four pairs, only Chantal Laboure of Stuttgart and Sarah Schultz lost their opening match on Friday. The German champions lost in Group J on Friday to France’s Lisana Plaset and Alexia Richard 1:2 (19:21, 21:15, 8:15). Its next opponents on Sunday are Australia’s Alicia Stevens and Georgia Johnson. The nominees in the group are Canadian world champions Sarah Pavan and Melissa Humana Paredes.

On the other hand, Karla Burger and Julia Sud, also from Stuttgart, reached 2:0 (21:9; 21:13) against Kenja Wojtasek and Katarzyna Kosiolic of Poland in Group L. Sandra Ettlinger and Isabelle Schneider of Hamburg won in Group A 2: 1 (20:22, 21:13, 15:11) against Mexicans Atenas Gutierrez and Maria Jose Quintero.

Svenja Muller and Senia Tillmann, who also trained in Hamburg, defeated Taravadi Naravornrapat/Wrapirachyakorn Kongphopsarutwady of Thailand 2:1 (17:21, 21:15, 15:11) after initial difficulties. The men’s only German team, Clemens Weckler and Nils Eilers, also from Hamburg, will start the tournament on Saturday against Hans Hannibal/Marco Kairos of Uruguay.

48 men’s and women’s duos each, divided into 12 groups of four teams each, play for the world title. The first and second places in each group as well as the four best third-placed teams qualify directly for the knockout stage. The other eight third-placed teams play the lucky loser in the last four of the knockout stage, which is made up of 32 teams each for men and women.