Persia Digest
Home Top News Standard did not do well: Roach ends the year with a defeat... 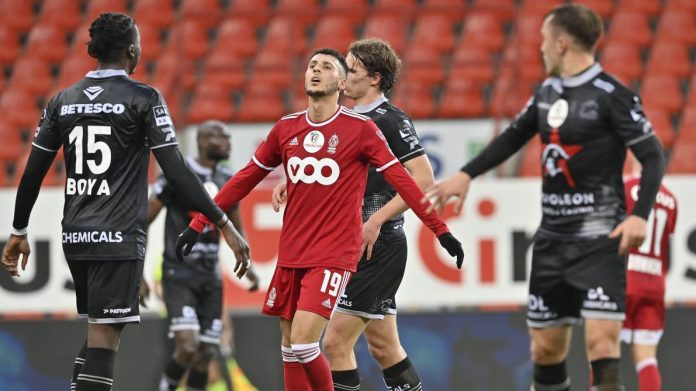 LThe Standard lost 0-1 to Zulte Waregem this Sunday, the 21st day of the Belgian Championship. Liege, who dominated part of the crowd, was surprised to find Jiho Kano felt in the 54th minute. With this defeat, Standard now has the same number of points as his opponent (23) and is only four units ahead of Seraing, by the end.

The victory against a direct opponent below the stand was condemned, after Cercle’s victory in the Bruges Derby earlier in the afternoon, there was no room for standard error.

Standard got off to a good start, the first chance to make Mervyn’s credit to Bogadi was too high to recover the head of his rectangle (6th).

At 16, following a free kick outside the rectangle, Selim Amalla touched the top of the crossbar, while Sami Bose appeared to have been hit.

Five minutes later, Bogadi made a good call and got the ball into the rectangle, but sent it to the stand.

Selim Amalla came out again in the 33rd minute. His strike, located at the entrance to the large rectangle, was just a few centimeters from the post.

At the start of the second act, Niels Nakonko started a long shot that licked over the crossbar (50th).

At half-time, Jinho Cono controlled a brilliant cross from Lawrence de Bogue with his chest, before which he started the half-volley again and sent the leather into the top corner of Arnaud Bordard (54th, 0-1). Against the course of the game, Timmy Simons’ men opened up one of the rare possibilities of a meeting.

The Standard responded aggressively and forced Joao Glass to pose for a corner kick (57th).

Rouches kept pushing, but could not find the hole in Zulte’s defense. The worst thing is that after Collins Foy’s second card (88th) Luca Elsner’s men finished at ten.

When Klaus controlled a long ball in a rectangular shape and saw the crash he was sending against the post (90 + 5), the Legios moved very close to the Golden Watch.

Summary of the competition