Persia Digest
Home World Astrazeneca, a vaccine against the South African alternative by the end of... 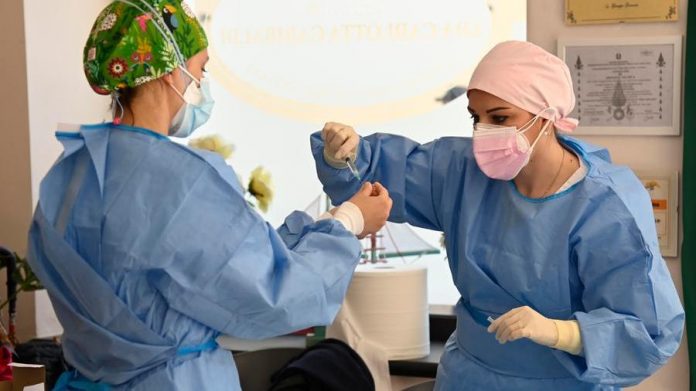 A new version of the Astrazeneca vaccine designed to combat the Coronavirus that was first documented in South Africa could be ready by the end of 2021. Sarah Walters, Country Manager for AstraZeneca in Austria, told the Courier newspaper: Studies so far indicate that the existing AstraZeneca vaccine has less Efficacy against the most contagious variant that was first documented in South Africa. On the delay in delivery, Walters blamed the “complex process” of producing a vaccine, along with the extremely high demand resulting from the coronavirus pandemic: “We had to work without holding a stockpile. We are confident that we will honor our commitment to deliver 300 million doses to the Union.” The European Union this year. “The European Union has placed a warning flag on the vaccine about its possible association with extremely rare blood clots, and Denmark has completely canceled the use of the vaccine and Britain has advised people under the age of 30 to get another type of vaccine.

Meanwhile, the coronavirus pandemic records nearly 141 million infections worldwide and exceeds 3 million deaths, according to the Johns Hopkins University budget that counted more than half a million new cases in the past few hours. Exactly 3,011,043 deaths have been recorded now and 140,735,224 infections since the start of the epidemic last year. The United States, where the epidemic is slowing down due to the impact of a vaccination campaign that guaranteed at least one dose of the vaccine for half of the adult population, remains the worst-affected country, with 31.6 million cases and 567,000 deaths. On the other hand, the epidemic is advancing in the second most affected country, India, which continues to record daily records of more than 100,000 cases per day, reaching 14, 7 million cases and 177,000 deaths. Brazil has 13.9 million injuries and 371,000 deaths. Mexico is third by 212,000.

India, the fourth day in a row, with the registration of injuries. Great Britain and Israel, have resumed the tests
India, which recorded for the fourth consecutive day a record number of infections with 261,500 new cases, and the capital, New Delhi, has been closed since yesterday. The numbers at the global level are terrifying, with an all-time high of new cases being reached on Friday (829,596 infections in 24 hours) and a total of 3 million victims of the epidemic. But there are those who leave, such as Great Britain and Israel, safely and can practice for a true return to normal life. However, across the channel, the concert without social distancing or masks was confirmed as a test event for the British government’s exit plan from the pandemic. About 5,000 people in Liverpool will be able to enjoy the Blossoms show in Sefton Park (which can accommodate 7,500 people at full operation) on May 2 provided they test negative for Covid-19. Viewers will have to take a quick test, which shows the result within 30 minutes, at a center set up on the site before entering, according to the Department of Digital, Culture, Media and Sports. Participants will also be required to take a test after the concert and will need to provide contact details for the National Health System (NHS) to ensure they can be contacted should positive test results emerge.

Another big milestone in Israel: For residents, the use of a mask in public places is no longer mandatory to deal with the Coronavirus emergency. According to some experts, the internal commitment could be canceled within the next month thanks to the sharp drop in numbers in the country. Currently, the number of seriously ill people due to Covid-19 is about 200 in Israel: at the end of January the number was around 1,200. Eligible for a vaccination campaign: About 5.3 million of the country’s 9 million people have received at least one dose of the Pfizer vaccine, and no Only one million Israelis over the age of 16 are vaccinated. Experts have warned that the country has not yet achieved herd immunity, but the effects on the country are there for all to see: most schools, for example, have reopened completely.

Italy’s vaccination boom On Friday, 400,000 doses of Moderna arrived
Meanwhile, Italy is still far from these scenarios, but the campaign has seen the acceleration the institutions are hoping for: 356,000 administrations were implemented in a single day on Friday, a record that Health Minister Speranza expects to surpass in the coming weeks. Last night, 400,000 doses of the Moderna vaccine arrived at the National Pratica di Mare Center and will be distributed to the regions starting today. To date, approximately 10 and a half million Italians have received at least one dose, 17.5% of the population. Only 4.4 million until the recall. This week, the rate of vaccinated vaccinations every 24 hours reached 291,000. It’s on the increase, but it’s still far from the 500,000 vaccines per day quota set by Emergency Commissioner Francesco Paolo Vigliolo. The number of vaccination points in the region increased by 102 units, to an increase of 2,276.

Italy and 16 other countries are under EU watch for imbalances...