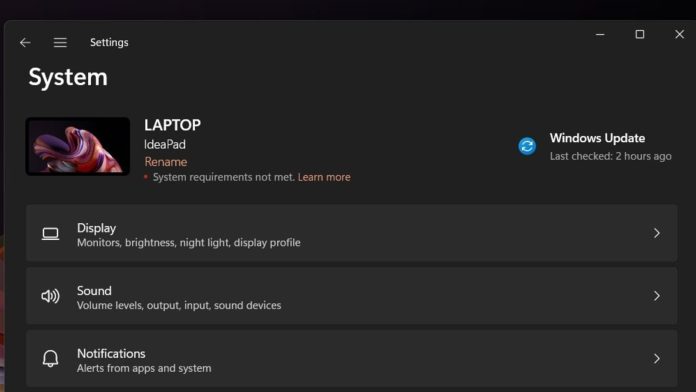 Microsoft Windows 11 will soon send a warning to your PC. It is a gentle reminder of you not having done something about a big problem.

Microsoft Windows 11 debuted in late 2021 with stricter PC system requirements needed to install the new operating system than the previous ones. It is a smart new operating system that requires huge amount of resources from PCs and laptops. With the earlier version of Windows, Microsoft used to try to keep the system requirements consistent from one Windows version to the next so that the upgrade could happen seamlessly. But with Windows 11, Microsoft took an extra step to warn all those people who do not have a modern PC or laptop, that they will not be supported by the company. That means, these PCs and laptops would not receive any updates and this could be a major security concern for the user. In fact, Microsoft limited the processors that can be used to run Windows 11. It, in effect, virtually barred older computer users. While Microsoft did not stop these users from downloading Windows 11, it told them that their gadgets were incompatible and that they should get new ones. As a result, systems that fail to fulfill one of Microsoft’s minimal requirements are given this warning, “This PC does not meet all of the system requirements for Windows 11”. The issue was dead and buried, but now, it seems like it will be revived again.

Now, even if your device has already installed and is working well with Windows 11, there will be a new alert that may come soon from the company warning you that your PC is incompatible. it will remind you that, “System requirements are not met.” So far, a Windows 11 experience on a non-supported PC has been similar to that of someone who is using it on a fully supported system. This is because, despite the fact that Microsoft has given warnings that it will not provide the basic security updates, it continued to release updates.

However, recently, Twitter user ‘Albacore’ shared a screenshot revealing that Microsoft may have added a new reminder. The Tweet reads, “Upcoming Windows 11 builds will include a small reminder about system requirements atop System Settings in case your device doesn’t meet them.” However, don’t worry, this small reminder doesn’t impact the functionality of the usage of Windows 11 on your device. In fact, users who are using Windows 11 with an incompatible device already know about this fact before installing it.

Microsoft has not provided any clarification on this warning that incompatible Windows 11 devices may not receive future updates after the initial warning. There is a possibility that the remark was made as a precaution. But it’s also possible that future updates, such as feature updates, will not install on incompatible devices, leaving you with a compromised system. That is something you will have to evaluate and act upon.