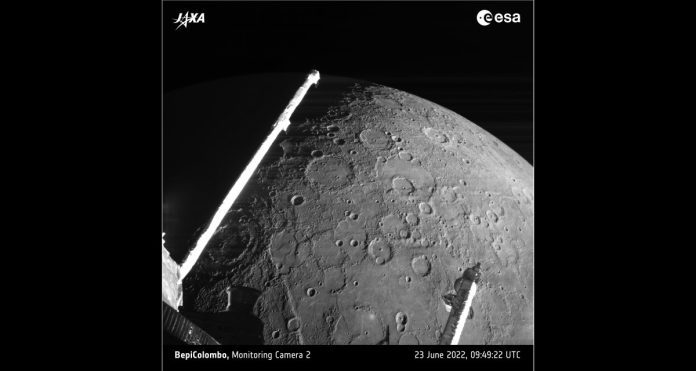 The European-Japanese space probe BepiColombo has passed Mercury for the second time, taking pictures of the innermost planet in the solar system. The first image, which shows part of the probe and Mercury’s crater-ridden surface, was taken from a distance of 920 kilometers. The probe later blasted across the planet just 200 kilometers away. During a total of six flights to Mercury, no images could be taken with the high-resolution main camera because it is protected in the probe. Until now, only so-called surveillance cameras can take pictures with a resolution of 1024 x 1024 pixels. The European Space Agency plans to publish more images in the coming days.

Mercury is also the actual target of BepiColombo, but before the probe can swing into orbit, it must fly over it several times and slow down. In October 2018, she began her seven-year journey. With two satellites on deck, it is set to examine the surface and magnetic field of the planet closest to the Sun from December 2025. The European-Japanese joint project aims at a total cost of about €2 billion to help understand the origins of the solar system. So far, the probe has already flown through Earth once and Venus twice, and it has passed Mercury for the first time in the fall. It will be magnified four more times before it can enter orbit in late 2025.

The mission of the ESA and JAXA space agencies is named after the Italian mathematician Beppi Colombo (1920-1984), who early calculated the basis of the path to Mercury. Preparations for the expedition took nearly 20 years. The reason is also the harsh conditions near Mercury: in order for the probe to survive in what the European Space Agency calls a “infernal environment”, a new technology had to be developed. The trip is also very complex, and requires more energy than the trip to Pluto. Although the distance from Earth to Pluto is much greater than the distance to Mercury, the gravitational pull of the Sun is much stronger on Mercury.

Featured features and settings in the new trailer