Persia Digest
Home science Discovery in the cosmic neighborhood: a planet made of iron 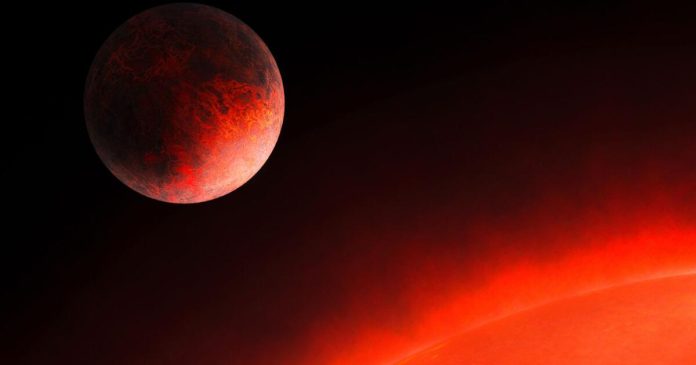 About 31 light-years away from us, an unusual planet orbits a red dwarf star: GJ 367b is about two-thirds the size of Earth – but appears to be made almost entirely of iron.

According to the report of an international research team in the journal “Science”, the temperature on the surface of an exoplanet reaches 1,500 degrees Celsius. That’s why its crust and most of its rocky mantle may evaporate, leaving only the core, which is mainly made of iron, according to scientists.

The red dwarf star is much cooler than our sun

“Our model of the internal structure of this planet shows that the iron core makes up about 86 percent of the planet,” write Christine Lamm of the Institute for Planetary Research at the German Aerospace Center (DLR) in Berlin and colleagues. This makes it less similar to the planet Mercury, where the core makes up 84 percent of the diameter.

Like the planet closest to the Sun, GJ 367b is also exposed to strong radiation. True, the red dwarf star, at 3800 ° C, is much cooler than our Sun, whose surface temperature is about 6000 ° C. But due to its close proximity to its star, the radiation on an exoplanet is 500 times stronger than on Earth.

Lamm and her colleagues tracked GJ 367b using the US satellite observatory TESS. The space telescope looks for periodic fluctuations in the brightness of stars, caused by planets that orbit the star and regularly pass in front of it when viewed from Earth.

This “way of transit” gives researchers the orbital time of the planet, in this case 7.7 hours. The planet’s size also results from the weakening of starlight during transit.

With the help of more observations at the European Southern Observatory, astronomers have also determined the mass of GJ 367b. Because through its own gravity, the planet pulls on its central star and sets it in slight motion.

This motion can be detected by tiny changes in the starlight’s spectrum – and the researchers can then calculate the mass from the force of the motion. From volume and mass, the density of the planet finally results in 8.1 grams per cubic centimeter, which roughly corresponds to the density of iron.

Red dwarf stars are of particular interest to astronomers when searching for planets. First, it is the most common type of star in the Milky Way. On the other hand, planets can be detected there more easily due to the reduced brightness of the star. The researchers estimate that, on average, each of these stars orbits two to three planets — many in very narrow orbits similar to GJ 367b.

Stunning exoplanets with two suns, protoplanetary disks around young stars, and a planet-eating black hole: Artists regularly create impressions from space for NASA that no telescope in the world can capture. Note: This is a gallery of images from our archives.