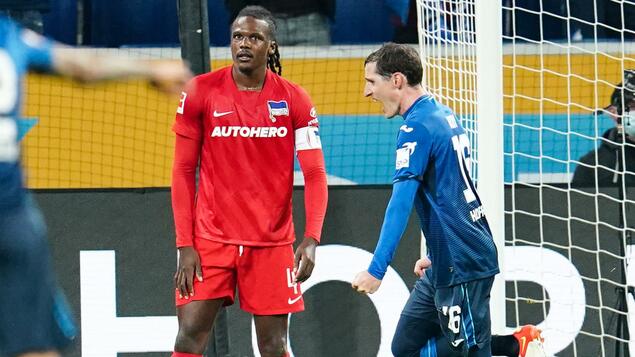 A quarter of an hour before the end, a normal evening for Hertha BSc turned out to be very bad. Referee Sven Japlonski was on the sidelines when he saw a screen and then took decisive action towards Totrik Poyota, captain of the Berlin Bundesliga club – and first showed him a red card for missing Belgian Angelo Stiller in yellow. .

Hertha did not land well in Cincinnati on Friday evening. The Intermediate High ended abruptly against TSG Hoffenheim. In the end the Berliners’ view was 0: 2 (0: 2). It was a worthy defeat as Hertha appeared at an early stage with the courage and determination expected after three match victories.

Cinnamon may not be a good place for Paul Darday. Herta has coached seven times in Kryskov with BSC against TSG. There he never succeeded; Friday evening 0: 2 is already Darday’s sixth defeat.

Herta had to do without coach Morton Dortoy and Marvin Plattenhart for a while without claiming to have muscle problems. For them – compared to the win against Borussia Mönchengladbach a week ago – recovered Niklas Stark and Deyovaisio Zeefuik were in the starting line-up. Peter Beckerick switched to the left as he defended four backs to the right of the Netherlands.

Hertha started confidently in a rarely occupied arena in Cincinnati. Guests got a good chance early on thanks to the currently most dangerous attacking player. But Marco Richter failed to find the back of the net with a good pass from Maximilian Mittelstädt and hope for Hoffenheim’s goalkeeper Oliver Baumann.

In the middle of the first half, TSG played better. After a cross from Robert Sko from the left, Ihlas Bebo ran the ball over his feet – Andrzej Gramrik made it 1-0. The Croatian has never scored against any other club in the Bundesliga against the Berliners. The 1-0 win was Hertha’s ninth goal against BSC. It has been one of the guests’ attractions ever since.

The beautiful new self-confidence of the Berliners suddenly seemed to have completely evaporated again. Hertha allowed it to Hoffenheim, who played very passively and defended poorly overall. The elements that re-energized Dorto’s team, compactness and grip against the ball, nothing was seen. So Hoffenheim’s next goal inevitably fell. After Scove hit the post, Sebastian Rudy made it 2-0.

The appearance of his team in the first half could not have pleased coach Darta. This was evident in the actions taken by the Hungarians during the break. He made two changes: Steven Jovatic and Mycian Mavolida came in for Vladimir Torrido and Irregular Geoffrey. Beckerick turned right and Mittalstad took a left-back position.

Dardai tried hard – to no avail

Hertha played a little more actively, at least initially, but was at risk from being faced by the Hoffenheim team. Unhappy with the situation, Herta’s captain Poyota easily stole the ball and the bowler had a good chance as soon as the restart was over. Nicholas Stark was rescued in great need.

Overall, the TSG in the Berlin attack did not have the punch needed to get into trouble – although Dartoy tried everything: he brought in the almost invisible Krzysztof Piatek, former Hoffenheim Ishak Belfodil and Jurgen Ekkelenkamp for the judges 20 minutes before the end. After a while, however, all attempts were finally thrown into the ship – when referee Jablonsky was sidelined when he caught an open-toed Hafenheim Stiller at the ankle. (Teaspoon)