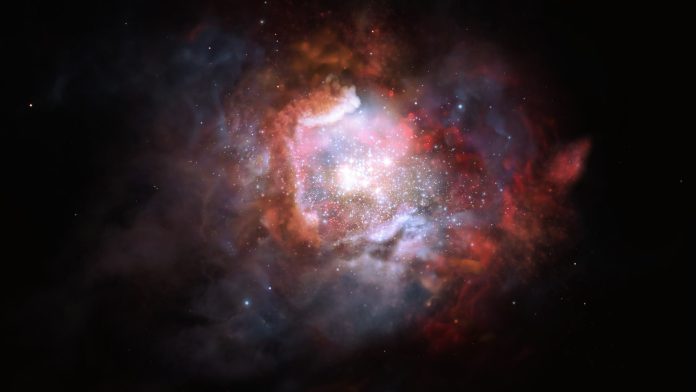 Originally, very soon after the Big Bang, the universe likely shone like a gigantic halogen lamp: its heat radiation was much hotter than it is today, and its temperature was about 3000 K. Since then, the universe has expanded, as has thermal radiation. The cosmic halogen lamp has become our current cosmic microwave background radiation, which has a temperature of about 3 K. Although researchers can use the Standard Cosmological Model to calculate the intermediate stages of this cooling, it is difficult to measure how hot the universe was a few billion years ago.

A cloud of water vapor in a starburst galaxy

The team led by Dominic Richers of the University of Cologne studied a star galaxy called HFLS3 in the constellation of the Dragon, whose light took about 13 billion years to reach Earth. Starburst galaxies are galaxies with many more stars forming than is currently the case in our Milky Way. HFLS3 is enveloped in a cloud of cool, highly diffused water vapor, which in itself is not unusual.

What was unusual became clear when researchers broke light from this galaxy and its cloud of water vapor into its component parts using the IRAM-NOEMA telescope in the French Alps. The cold water vapor cloud absorbs the light emitted by the warm starburst galaxy within. Therefore, dark absorption lines appear in such a spectrum. However, the width of one of the absorption lines was twice its expected width. Figuratively speaking, the sky was twice as dark in this wavelength range. This indicates that the cloud of water vapor not only absorbed the light from the starburst galaxy, but also an additional source of radiation.

Cyberpunk 2077 could have looked good