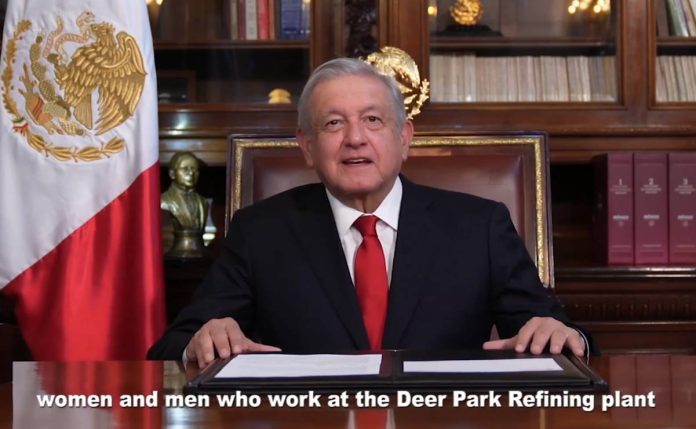 The final will be done after the acquisition of the refinery Deer Park, In Houston, Texas, by Bemex Shell, President Andres Manuel Lopez Obrador He assured the plant workers that there would be no layoffs or reductions in wages, but asked them to continue working with the same profession to guarantee profits and avoid profits and losses.

During the nearly nine-minute message, the country’s President Pemex was confident that the plant’s workers would retain their enthusiasm and professionalism, for which he warned that there should be no losses.

Read more This is the deer park, Texas refinery, which already comes from Mexico

In this sense, the Federal Executive President promised that he would continue to work with them under Pemex’s new administration because his government did not see any boundaries because “we belong to the Universal Brotherhood.”

“Tell them we promise to continue working with you. We are citizens of the world, we belong to the Universal Brotherhood, we see no boundaries, we are interested in human beings and the workers of the world.

“Therefore, you can be confident that there will be no redundancies and no reduction in wages for workers and administrative staff,” he assured.

The federal leader pointed out that his government only manages the money of the Mexican people, for which he is obliged to be “good executives” and that the profits of the companies should benefit the development of the country and the poor Mexican people. .

Read more What is Mexico looking for when it buys its first refinery out of the United States?

President Lopez Obrador, on the other hand, thanked the US government for authorizing the Mexican government to acquire the entire refinery, as well as gaining the trust of Shell shareholders to carry out these buy-and-sell.

“It gives me great pleasure to speak with you, and of course you will have the opportunity to speak with Octavio Romero Oropeza, Director and Engineer, Pemex. He is our representative and we have full confidence in him. I would like to express my gratitude to the shareholders of Shell for giving us the confidence to do this. Buy and Sell

“I also thank the US government for their recognition of the acquisition of the refinery in Mexico.