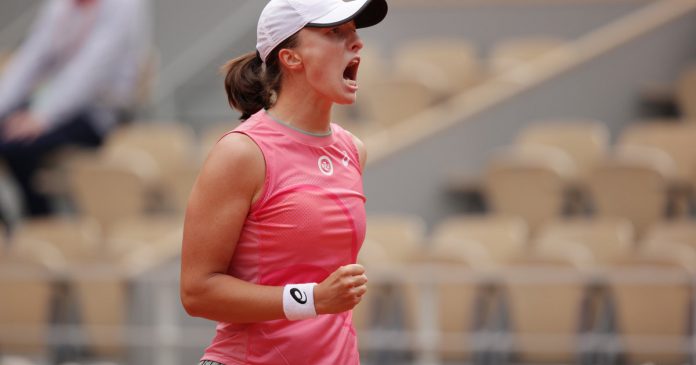 Iga Swiatek Has 6:3 and 6:4 success against Marta Kostyuk Reached the quarter-finals of the French Open.

The women’s competition at the French Open has so far been marked by major surprises and a bitter withdrawal from the tournament. It started before the tournament even started, because clay court specialist Simona Halep had to cancel her appearance beforehand. This was followed by the withdrawal of Naomi Osaka and Ash Party’s father and Petra Kvitova’s strange injury. And a lot of surprises.

The main remaining title favorite is Iga Swiatek of Poland. After a tough two-set win over Marta Kostyuk, this was already in the quarter-finals, now up against Greece’s Maria Sakkari, who eliminated last year’s final Sofia Kenin from the afternoon tournament. For defending champion Swiatek, that may be enough to double this year: the Polish women are still represented in the double competition.

Swiatek with a difficult start

At the start of the confrontation with Kotyuk, Iga Swiatek had a tough time initially, conceding the first half of the match to make it 1:2. A very competitive game ensued, in which the 20-year-old finally made a recovery. A high-level balanced match developed between two women who are considered hot stocks to the future of tennis – especially since Marta Kostyuk is two years younger than last year’s exciting winner.

Taking advantage of this little routine advantage near the end of the first set, she hit a play-off when the score was 3:3 and immediately secured the break to 5:3 with a set backhandkick. With the third set ball, the rankings closed the first round ninth moments later.

The group win at the start should give confidence to Swiatek, who secured the break advantage again in the third game of the second set. And Marta Kostyuk? I acted a bit frantic now and had to be treated for a while. Although Kotyuk came back a bit out of nowhere with a break in the second round and meanwhile made it 3:2, then Iga Swiatek converted it again.

The world number nine ramped up his hit count again, then grabbed a few tight matches and rewarded the game’s 5:3 win with a loud thrust that rarely reverberated in the deserted Philippe Chatrier. Unwilling to admit defeat, Marta Kostyuk quickly bumped into a match point on her serve with a forehand and forced Swiatek to end the match by sending herself. The challenge that the Poles must succeed after 0:30 – Swiatek made a perfect 6:3 and 6:4 success after just over an hour and a half.

Do not miss any news!