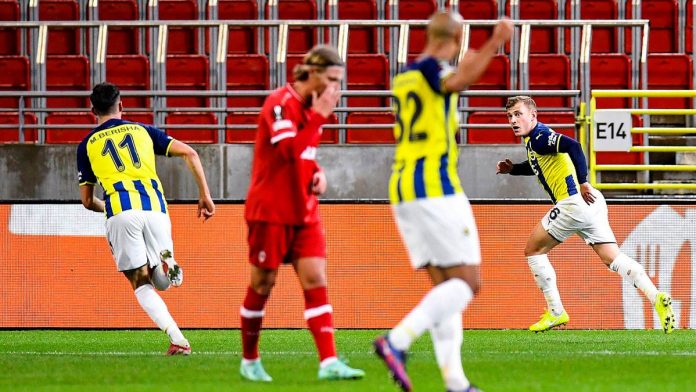 Fans of Fenerbahce Istanbul can continue to hope for winter in the middle round of the European League. Thanks to a celebratory performance by former European U-21 champion Max Mayer and European U-21 champion Mirghem Berisha but without ailing former national player Mesut Ozil, the seventh table of the Turkish Super League 3-0 at Royal Antwerp reigned. Thanks to Eintracht Frankfurt’s away win over Olympiacos Piraeus, Fenerbahce can still catch up with the Greeks.

After the riots in the Antwerp match against Frankfurt, the match had to take place without spectators. Fener found better in this ghostly backdrop and hit nine minutes later for the first time through Mert Hakan Yandas, who hit with a flick. Then the show of Mayer and Berisha began: at first Berisha Mayer, who grew up quietly (16.), wore it. Then Berisha hit the final score before the break. After a cross pass from Yandas, he kicked a stunt with side drag (29).

Everything is still open in Group E: in a duel directly behind leaders Galatasaray Istanbul, Olympique Marseille and Lazio Roma split 2-2 in an intense match. The hosts of Arkadiusz Milik advanced in the first round at the Stade Velodrome with a penalty kick (33). After a corner kick, Felipe Anderson equalized before the break, the VAR corrected a previous offside decision (45 + 5). In the second half, Lazios goalkeeper Ciro Immobile scored the first goal: the former BVB striker turned faster after a gag in the Marseille defense and turned cold (49). But Marseille was able to please the home fans a little: veteran Dimitri Payet shot the ball into the net from a narrow angle. The southern French team (4 points) is now one point behind Lazio and can even overtake leaders Galatasaray (8 points) in the last two matches.

Other results at a glance: