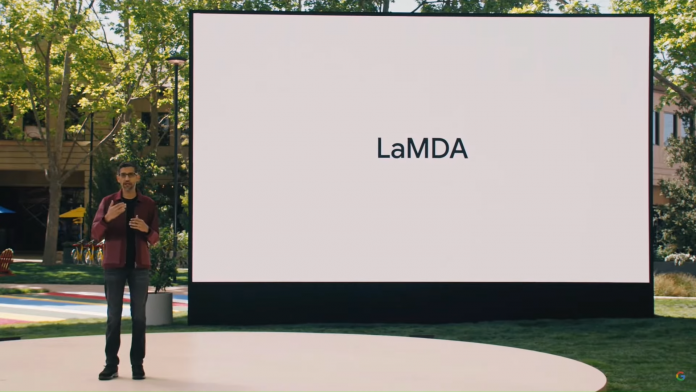 LaMDA can have a full and cohesive conversation on an endless number of topics.

Google’s annual I / O conference is an opportunity for the company to introduce all kinds of new technologies, especially in the field of artificial intelligence. Google took the opportunity to reveal the progress it has made on the LaMDA project.

LaMDA (Language Model for Dialogue Applications) is an artificial intelligence capable of understanding conversation. A robot can pretend to be anything and everything and start a discussion on any topic in a natural way. LaMDA’s latest idea is to program chatbots that can pretend to be a company, person, entity, or whatever. To better illustrate this AI concept, Google took an example of a discussion with Pluto, then with a paper plane.

LaMDA is able to improvise responses by pretending to be Pluto, that’s just amazing. If the AI ​​could engage in any conversation, without requiring a predefined text, it is thanks to the many concepts it would have stored and learned. This keeps the dialogue open without getting wrapped up in circles. In the example of Pluto, No response was specified in advance “Google chief Sundar Pichai says. The dialogue seems to flow naturally.

This chatbot differs from what we already know with Alexa, Siri, or the current Google Assistant, because the ultimate goal is to use LaMDA verbally, in a seamless conversation:Unlike other language models, LaMDA is trained in dialogues. During his training, he discovered the various nuances that distinguish conversations from other forms of language.», Google explains in his blog.

For now, AI is still in its infancy and has only been trained on text. The next step will be the ability to discover information simultaneously through text, audio, video and image. This will allow questions to be posed through various sources of information, as in a conversation about traditional messaging, in short.

In addition, Google said it cares about biases in such artificial intelligence and is trying to reduce the risks. In fact, AI only interprets the data given to it, and thus can take into account biases, hate speech and disinformation, as it has already been the case several times in the past. Microsoft Twitter chatbot was remarkable He became very racistOnly 24 hours after you logged into the social network.

Mountain View said it tends to add LaMDA to Google Assistant eventually. Moreover, the bot will definitely be dedicated to other services and companies. In any case, LaMDA is still only in the internal project stage at Google, and the company has not yet provided information about a possible modification of the AI ​​program for the general public.