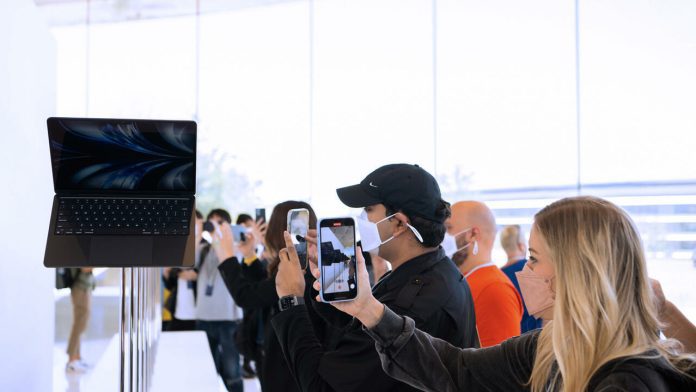 The inaugural show was held in the presence of hundreds of engineers and journalists on the group’s campus in Silicon Valley for the first time since the start of the pandemic.

Several product managers walked away to reveal, among other things, a new homemade chip, a customizable iPhone screen protector, a new payment system for merchants, the ability to correct or delete messages, advanced tools based on artificial intelligence, and a complete update of its car operating system (CarPlay). ) and the new MacBook Air.

Carolina Milanesi, an analyst at Creative Strategies, noted that once there is no customization, “Apple responds to users’ shopping list.”

“They listen to what consumers say and make changes. They remove a lot of friction in their operating system,” she says, “which is a critical problem when we spend more time online to work, distract, go shopping etc. since the health crisis.”

Some of the features seem to be catching up, especially on Apple Maps, the Maps app that has long lagged behind the hugely popular Google Maps.

But to the expert, the star of the show is the M2 chip. At the end of 2020, the group launched a new line of laptops equipped with its own chip, the M1, instead of Intel’s, marking the start of a two-year transition.

“They mentioned a lot of things they couldn’t do before… like really high-quality video games,” she noted.

However, there is not a word about the so-called “mixed” (augmented and virtual) facts, the pillars of the metaverse, and the future of the Internet that many digital companies have pledged to build, from Meta (Facebook, Instagram) to Fortnite and Roblox alongside video games.

Rumors have swirled for months about an Apple VR headset that will be in the works for this year. At the end of January, President Tim Cook said he saw “a lot of potential in this area” and was “investing in it accordingly”.

Apple also did not mention the App Store, its primary platform for downloading apps, which angered many of its California neighbors with its strict rules on confidentiality and commission payments.

Girl’s face! The donut ads may have accidentally revealed the...