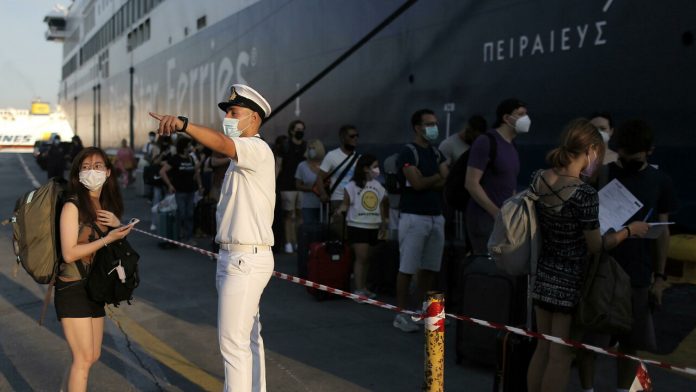 Greece needs to resume tourism to revive the economy, but not at any cost. Over the weekend alone, more than 2,500 people were prevented from boarding the country’s ferries to the islands because they did not have the green pass or in any case official documents proving a coronavirus vaccination, a recent recovery from the disease or a negative test later. More than 72 hours before departure.

After carriers or port authorities were judged too lenient, Athens ordered boarding checks to be carried out directly by the coastguard, which was inflexible. Speaking to a local television, he accused the Coast Guard that “the Coast Guard bears responsibility for the inspections of the passengers because their mansions have been found so far.” Giannis PlakiotakisMinister of Maritime Transport.

The tightening of travel controls comes after a week-long music ban and the imposition of a nighttime curfew on the island of Mykonos, where the spread of Covid-19 cases has broken out. Under the new rules, music is banned in restaurants, cafes and clubs, and only those who come and go from work or hospital can commute from home between 1 and 6 a.m. New regulations have put many local tour operators in trouble, as the Cyclades island is known for its nightlife and discos.

On July 15, local officials warned that the number of cases in Mykonos had quadrupled in one week, exceeding 300. Since Saturday, organizers of private parties of more than 20 people face fines of up to 200,000 euros due to the increasing number of secret parties. In the island villas disturbed the authorities. Greece has seen a steady increase in infections in recent days, largely related to the delta type. Nearly 2,700 new cases were recorded on Friday, up from less than 400 three weeks ago.

Vatican: The budget of the Holy See rises to 66.3 million...