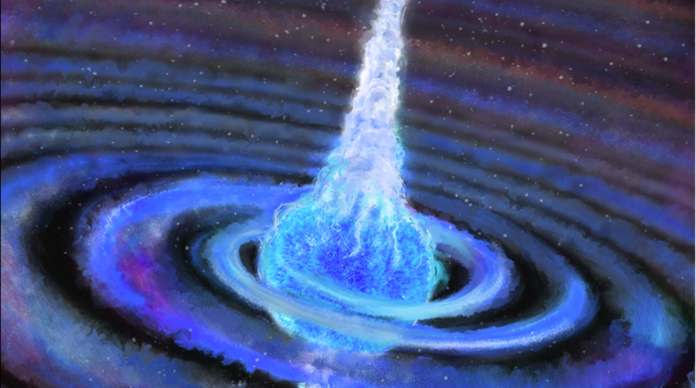 The mystery of a particularly bright and short-lived radio signal captured in 2017 appears to have been resolved. It may have been a supernova caused by the collision of a star.

Researchers at the California Institute of Technology (Caltech) in Pasadena, California sureTo find an explanation for an unusual radio signal. They found this while searching data for the Very Large Array Telescope (VLA) in New Mexico, USA. Its treasure trove of data is regularly searched for unusual radio signals. Especially so-called volatile radio sources, that is, those that briefly glow in the dark like a match but are very bright, are of interest to science. Such a source was discovered by Dilon Dong of the Caltech. It was shining brighter than any supernova – the explosion through which a star passes – that has been detected before. The VLA classified the event as VT 1210 + 4956.

“Brighter than any previously recorded supernova”

During his analysis, Dong found that the bright radio emission was originally a star surrounded by a thick, dense crust of gas. The star repelled this gaseous shell a few hundred years ago for an initially unexplained reason. VT 1210 + 4956, the ultra-bright radio signal, must have been generated when the star finally exploded in a supernova, and the material released from the explosion collided with the gas envelope. However, the gas envelope itself and the length of time it was ejected from the star were unusual, leading Dong to suspect that there might be more to this explosion.

Dong and his colleagues were only able to find a plausible explanation for this extremely powerful supernova when Caltech graduate student Anna He came up with the idea of ​​comparing VT 1210 + 4956 with another catalog of short, bright events in the X-ray spectrum. Some of the X-ray events recorded there were so short-lived that they could only be seen in the sky for a few seconds on Earth.

In fact, Dong found what he was looking for while checking this other catalog. He can identify an X-ray source that appears to have come from the same point in the sky as VT 1210 + 4956. Through careful analysis, Dong determined that the X-rays and radio waves must have come from the same event, but they haven’t been linked yet.

This is the amazing interpretation of the extremely bright radio signal

After careful modeling, Dong and his team came up with an amazing explanation. They suspected that a compressed remnant of a previously exploded star – a black hole or neutron star – had reached and then tightly orbited another star. Over time, the black hole began sucking up the star’s atmosphere and throwing it into space, causing a ring-shaped bulge of gas. This process brought the two objects closer together until the black hole collided with the star, then collapsed and exploded as a supernova.

On the other hand, the X-rays were generated by a beam that exited from the star’s core at the moment of collapse. The radio waves, in turn, did not appear until years later, when the exploding star reached the grain of gas that was once its atmosphere.

It is known in astronomy that a massive star and its accompanying body can form a so-called stable orbit, where the two bodies converge in a spiral and come close to each other over a very long period of time. This creates a binary star system that can remain stable for millions to billions of years, but will eventually end in a collision.

In the case of VT 1210 + 4956, the two bodies collide faster. VT 1210 + 4956 is the first evidence of the end of a binary star system that was previously only expected in theory. The Caltech team published their research in the scientific journal Science on September 3.