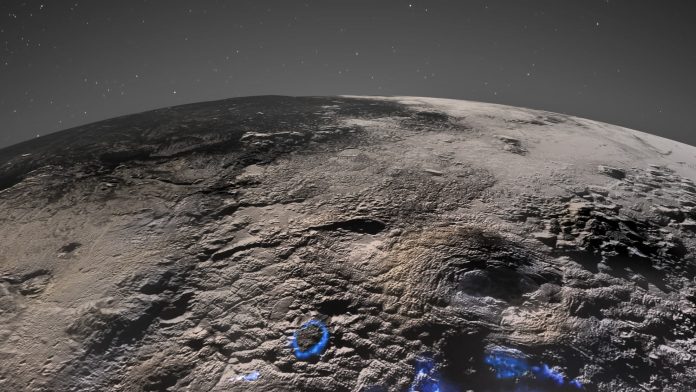 A study on Tuesday reported that ice volcanoes were active until relatively recently on the dwarf planet of the solar system.

On the surface of Pluto, strange masses never seen before in the solar system indicate that ice volcanoes were active until an era relatively close to the dwarf planet of the solar system, according to a study published Tuesday in Nature Communications.

Instead of spewing lava, ice volcanoes spew a “thick, hydrated mixture of water and ice, or perhaps even a solid flow like a glacier” onto Earth, explained Kelsey Singer, a planetary scientist at the Southwest Research Institute in Colorado.

We know that there are ice volcanoes on several moons of the solar system, such as Triton. Those on Pluto “look very different from anything we’ve seen so far,” added this co-author of the study.

There are “vast expanses of very large ice volcanoes, with a wonderful texture of undulating terrain” on this star in the outskirts of the Solar System.

It’s difficult to date these volcanoes precisely, “but we think they could go back a few hundred million years or even less,” according to Kelsey Singer.

The area where these formations are devoid of craters from asteroids, scientists do not exclude that ice volcanoes are still forming there.

“They suggest that a small celestial body like Pluto, which should have lost most of its internal heat long ago, was able to retain enough energy to fuel large-scale geological activity very late in its history,” she added.

“These ideas should allow us to reassess the possibility of conserving liquid water in small, icy worlds far from the sun.” As on the moons of Jupiter, Ganymede, Europa and Callisto.

An extraterrestrial signal was not from another planet; It was...