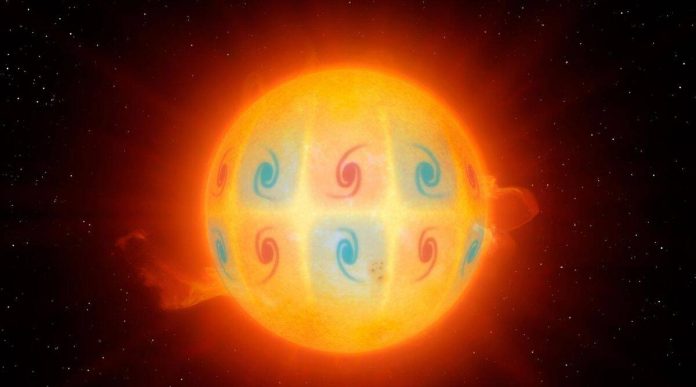 Researchers from New York University, Abu Dhabi and the Tata Institute of Fundamental Research have discovered a set of new spin (spin) waves coming from the Sun that are moving much faster than can be expected by current theories. High-frequency retrograde (HFR) waves were discovered after 25 years of analysis of 25 years of space and terrestrial data moving in the opposite direction of the Sun’s rotation and appearing as a pattern of vortices (fluid-like spinning motions) on the surface of the Sun moving at three times the speed predicted by current theory.

The researchers tested three hypotheses trying to explain the waves: that they are caused by magnetic fields within the sun; They come from gravitational waves in the sun. And they occur due to the pressure of the plasma. But none of the three hypotheses held up well against the data on HFRs.

But strangely enough, the behavior of these waves is very similar to a type of wave found in Earth’s oceans known as Rossby waves, which also travel much faster than researchers can explain.

“The existence and origin of the HFR patterns is a real mystery and may hint at exciting physics in the game,” Shravan Hanasoge, one of the authors of the research paper, told EurekAlert, a science news service. “It has the ability to give insight into the interior of the Sun that cannot be seen otherwise.”

With no convincing explanation for these HFRs, the researchers concluded in the article that “it is clear that there are missing or poorly constrained components in standard models of the Sun, and that identifying the mechanism responsible for HFR modes will deepen our understanding of the interior of the Sun and stars.”

This gaming phone is more powerful than my gaming PC and...