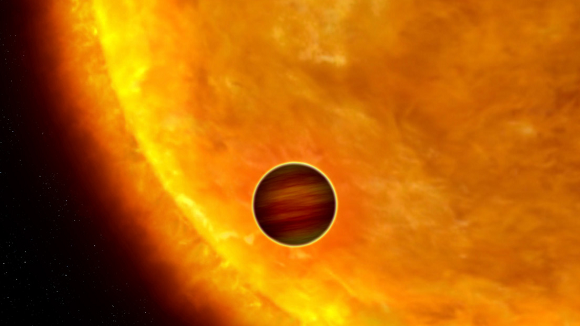 Artist’s drawing of a Jupiter-sized planet passing in front of its parent star. Photo: NASA/ESA/G. Bacon/Reuters.

A group of international scientists have discovered a huge exoplanet in it Years last only 16 hours due to its proximity to its star.

It is TOI-2109b, which belongs to the class of hot Jupiters or pegasids. It is estimated that it is 35% larger than our own Jupiter and that it weighs about 5 times the gas giant in the solar system, according to The Astronomical Journal, Which collects details of the discovery made in cooperation with NASA.

An exoplanet is very close to its parent star, about 1.5 million miles (2.4 million km), which explains its short years. For comparison, the distance between Mercury and the Sun is 57.9 million km.

Due to its proximity to its parent star, the temperature on the side of an exoplanet is estimated to be around 3,500 K (3,226 °C), making TOI-2109b “the second hottest planet discovered to date,” according to a statement from Massachusetts. Institute of Technology (MIT).

to meet your sun

Experts consider the planet to be going through a process of “orbital decay,” which means TOI-2109b is spinning toward its parent star at a rate of 10 to 750 milliseconds per year (faster than other hot Jupiters).

“In a year or two, if we are lucky, we will be able to discover how the planet approaches its star. We will never see the planet fall into its star, but give it another 10 million years and it may not be the planet,” said Ian Wong, one of the lead authors of the study. exists.”

How was it discovered?

On May 13, 2020, NASA’s Transiting Exoplanet Study (TESS) satellite, in collaboration with MIT, launched the star TOI-2109, located in the southern part of the constellation Hercules, about 855 light-years from Earth. At the time, it was called an “interesting topic”, because it could host a planet in its orbit.

The TESS team of scientists then analyzed the light radiating from the star to determine the presence of “a periodic diminution of starlight that could indicate a planet is passing, briefly blocking a small portion of the star’s light.”

The collected data confirmed that the star has an object that passes every 16 hours. Subsequent observations, through the use of ground-based telescopes, showed it to be an exoplanet, now called TOI-2109b.

Differences between night and day

According to experts, the discovered pegasidum “appears to be obscured by tides,” a characteristic of most planets in this class. Despite the extreme heat in the day period, it is not yet known what conditions look like on the night side.

“Is the temperature there too cold, or does the planet somehow transfer heat from the day to the night side? We’re trying to answer that question in the case of this super-hot Jupiter,” said Avi Shporer, one of the study’s authors.

Meanwhile, TOI-2109b is scheduled to be observed in the near future using the Hubble and James Webb telescopes (not yet launched).

(with information from RT)