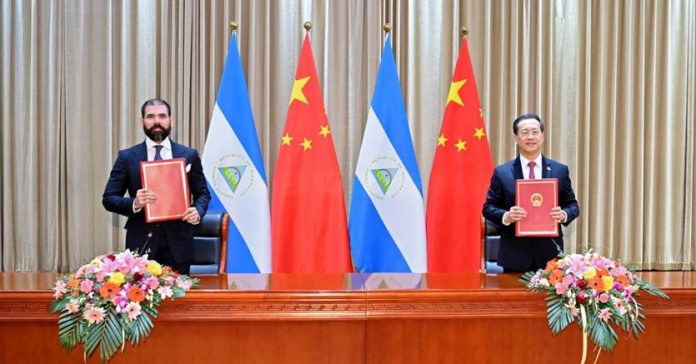 Nicaragua has severed diplomatic ties with Taiwan, recognizing the “one China” principle. “The People’s Republic of China is the only legitimate government representing all of China, and Taiwan is an inalienable part of Chinese territory,” said Nicaragua’s Foreign Minister Denis Moncada. An announcement that specifically came in conjunction with the American initiative for a democracy summit, to which Taiwan was invited but Russia, and China specifically, was excluded from it, and at a historical stage that witnessed Beijing’s pressures and provocations against Taipei. increasing in severity.

In response, the US calls on democratic countries to “increase their relations with Taiwan” following Nicaragua’s move. “We encourage all countries that value democratic institutions, transparency, the rule of law and promote the economic prosperity of their citizens to increase their relations with Taiwan,” the ministry wrote in a press release. The statement added that the separation from Taipei, announced as a surprise by the government of President Daniel Ortega, “deprives the Nicaraguan people of a loyal partner for their democratic and economic development.”

The official announcement of the Managua government was received with regret, but firmness, by the Taiwanese authorities. The Taiwanese Ministry of Foreign Affairs, in a message spread on Twitter, noted that in this way “the Ortega government ignores cooperation that is beneficial to the people.” For its part, Nicaragua’s opposition newspaper La Prensa said tonight that “Taiwan is the most important donor country to Nicaragua”, providing, among other things, important resources for “the health, economic, social and animal sectors” and being a “key ally in Nicaragua”. Central American Bank for Economic Integration (Cabei), an institution that has economically supplied the Nicaraguan authorities with oxygen. Until the middle of this year, the newspaper finally emphasized, “Taiwan has already bypassed the European Union as a source of resources, having increased its financial commitment to the Managua government.”

See also  Latest news of Ukraine. Today I vote in the Security Council against the Moscow "referendum".

“With deep regret we have severed diplomatic relations with Nicaragua: the long-standing friendship and successful cooperation for the benefit of the peoples of the two countries have been neglected by the Ortega government,” reads a note from the State Department. Taiwan, which states that the island has “always been a loyal and reliable friend, working for a long time to improve” Nicaragua’s development.

Exciting earthquake in Munich Do you know Stephanie’s daughter? Here...