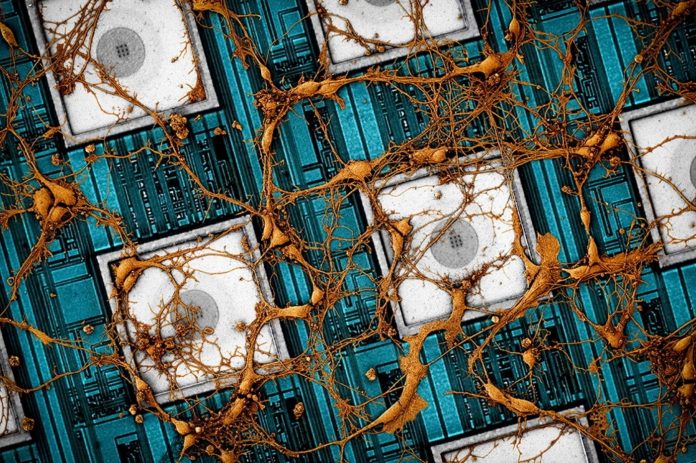 In a new study with Harvard University (just that!), Samsung said it can create a memory chip that is much more than brain-inspired. A bit like a real copy/paste.

A memory chip with the characteristics of the brain?

The experts behind this study, which was published in Nature Electronics, are conclusive. The neural connection map of the brain can be copied. Using a network of nanoelectrodes created by Drs Ham and Park, electrical signals produced by all neurons in the brain can be recorded. This will then reveal where they are connected to each other and how strong those connections are.

Once copied, it will then be possible to “paste” the neural map onto a high-density semiconductor 3D memory array. Such as non-volatile memory, which is used for example in random access memory (RRAM).

Simply put, we will find the complex properties of the brain on memory chips. And so the latter Low power consumption and greatly facilitate learning. They will also show some adaptation to their environment, and unparalleled independence and awareness.

The study even suggests a way to speed up the ‘sticking’ of the neural map. It will then be necessary to download the latter directly to the memory stick.

“The vision we are proposing is very ambitious.”, Donhee Ham admits from Samsung Advanced Institute of Technology. “But working toward this heroic goal will push the frontiers of artificial intelligence, neuroscience, and semiconductor technology.”Concludes. What do you dream of?

In any case, Samsung plans to continue its research into neural engineering. This is all part of the development of AI-powered semiconductors.

In the most recent fiscal quarter, the South Korean giant posted its best operating profit in nearly three years. 63.67 trillion won in sales and 12.57 trillion won in operating income. Samsung’s semiconductor business accounted for nearly half of the last figure at 6.93 trillion won.

It remains only for us to see if our minds will be able to. -First- It is copied/pasted onto a memory stick. But with so many billions of neurons, this would require a huge amount of work…