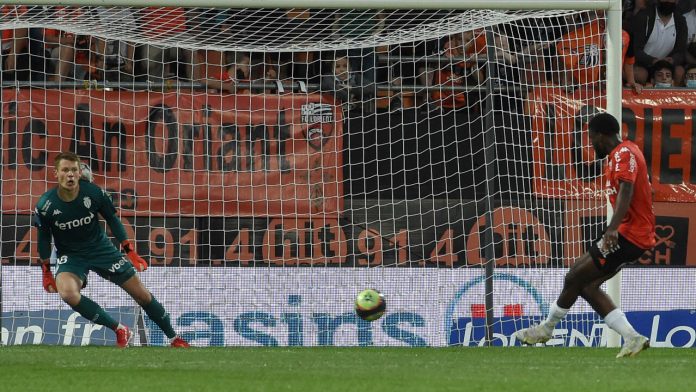 Monaco, who competed in the European Marathon to advance to the group stage of the Champions League, suffered another setback in the league after losing 1-0 at Lorient on Friday in the second day of League 1.

Faced with a solid Lorient team in defense and under pressure, they mostly dominated (73% possession) but were surprised by the penalty and were replaced by Derem Moffy, who had already scored 3 of 14 goals. Against Monaco last season.

A few days after the win against Prague in the opening round and before challenging Shakhtar Donetsk on Tuesday evening, Monacax took on the task of catching up in League 1 after a 1-1 draw in C1’s first leg play-off. At home against Nantes at the start of the championship.

Although many executives remained on the bench for the European meeting, Monaco animated the discussions, especially thanks to the very active Sofian Diop. But rare Monacos chances passed or collided with goalkeeper Paul Nordy in excellent form.

Opposite, if Lorient circles could scratch balloons like Laurent Abergall, they would have struggled to serve the lonely Moffy and Armond Laurente in front of them. Rookie Ismail Jacobs was fined by Mofi for his mistake until it came into effect (1-0, 31st).

But more than 12,000 spectators were delighted to see the Mustoyar Stadium, which was becoming more and more exciting after an almost closed season, and Hawkes kept this little improvement until the end.

When he saw that Strahinja Pavlovic was alone in Alexander Kolo’s free kick box, he did nothing but input the Monacos executives into the hourly sign. But the young Serbian defender’s head collided again with Nordi. Kevin Holland’s shot missed in the straight.

Golovin, who had just returned from a four-month hiatus when Monacos last played at Monte Staire in January, played his first ball in a matter of seconds and scored a superb strike.

Monaco then won 5-2, but Lorient, who wrote the setback last season and promoted a 1-1 draw at Saint-Etienne last week, is certainly no longer the same team.