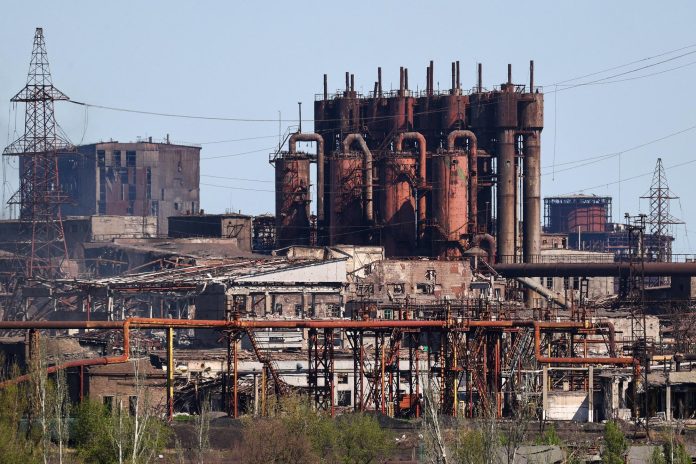 Russian forces closed one district of Mariupol to target another Possible attempt to storm the steel plant in Azovstal. This was stated by Petro Androshenko, advisor to the Mayor of Mariupol. “Currently, the occupiers have closed the yard of the Left Bank district again from Veselka Park, north of the steel plant. This may be due to another attempt to storm the Azovstal or street fighting.”

The situation is now in Azovstal Mariupol ‘Beyond the humanitarian catastrophe’ Major Serhii Volina, commander of the 36th Marine Brigade who commands Ukrainian forces holed up in the steel plant, along with hundreds of civilians, including, he explained, sixty children, one of whom is only four months old, told CNN.

“We have very little water left, very little food,” Volina continued, explaining that the recent Russian bombing of the field hospital inside the compound destroyed vital medical equipment. “The operating room was directly hit, and all equipment and materials needed for operations were destroyed. – He added – “We cannot treat our wounds, especially bullets and shrapnel wounds.”

The commander then said he “doesn’t know the details” of the potential evacuation plan announced today. “I know that the mission has arrived in Zaporizhia and they are trying to launch a rescue operation,” he added, adding that he was in direct contact with President Volodymyr Zelensky, who briefed them on “the situation throughout Ukraine and Mariupol’s attempt to” maintain high morale.” The certainty of how long we will be able to resist – and he concluded that it all depends on the movements of the enemy and also on luck, we have high hopes for the possibility of evacuation, in the fact that the chief will be able “to drive them out.”

See also  The farce of German tanks in Ukraine- Corriere.it

while Russian forces kidnapped British volunteers in Ukraine while they were evacuating civilians. CNN reported this, citing a statement by Dominic Byrne, co-founder and chief operating officer of the British non-profit Presidium Network. Aid workers lost contact with the organization on Monday morning as they traveled south of the city of Zaporizhzhya in central Ukraine to help organize the evacuation of civilians to the area.

Neither is directly dependent on the Presidency’s network, but the organization offered support, according to Byrne, adding that a family the two men had attempted to evacuate from Zaporizhzhya were later questioned by Russian soldiers, who asked if the volunteers were “British spies.”