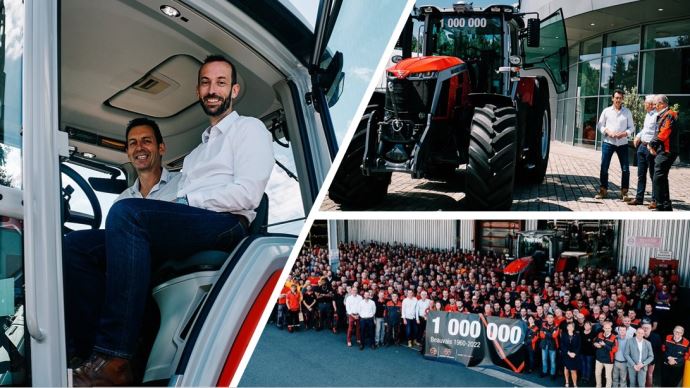 Nearly 62 years after beginning production at the Beauvais site, Massey Ferguson has produced its millionth tractor. The 8S Dyna-VT model was delivered to Thierry Aubrée, farmer and businessman in La-Chapelle-des-Fougeretz, in Ille-et-Vilaine, via the Hervé Motoculture Agency.

On the Beauvais campus, Massey Ferguson teams celebrated the launch of the Millionth Tractor, with its first owner, Thierry Aubrey, a farmer and entrepreneur in Ille-et-Vilaine. (© Massey Ferguson)

Dre Its factory is in Beauvais, located in Oise since November 1960, Massey Ferguson just launched its millionth tractor. In this case, the 8S Dyna-VT model that joined Brittany. The proud owner of this iconic copy is a farmer and agricultural contractor in La-Chapelle-des-Fougeretz, northwest of Rennes. It is a brand and loyal agency of Hervé Motoculture. On his farm, red is everywhere: 4 tractors, 3 combine harvesters, 2 balers, 1 telescopic bulldozer.

“Our Beauvais Campus has grown steadily over the past 62 years, working with and for farmers. On behalf of all our employees, I would like to thank our customers for their steadfast trust. We are especially proud to be represented today by the owner of this new brand MF 8S.305 Dyna-VT ”, explained Thierry Lot, President of AGCO in France, on June 14 at the ceremony for the delivery of the tractor to the farmer, in the presence of several factory workers.

?? Mr. Aubrée Millionaire #Massey Ferguson The tractor collected MF 8S.305 Dyna – VT!
this is # announcer The machine is on its way to deliver strength, performance and years of loyal service. ??
Talk to your local MF agent?? https://t.co/r1qAPaOEu3 pic.twitter.com/vuX3lfRjfF

?? What a milestone to reach! More than 1,000,000 tractors were produced in France at the Beauvais plant, ?? It’s a million # announcer Machines!
To all of our growers, dealers, employees and fans, a big THANK YOU from the MF family!

Up to 100 jars leave from the Buffet site each day