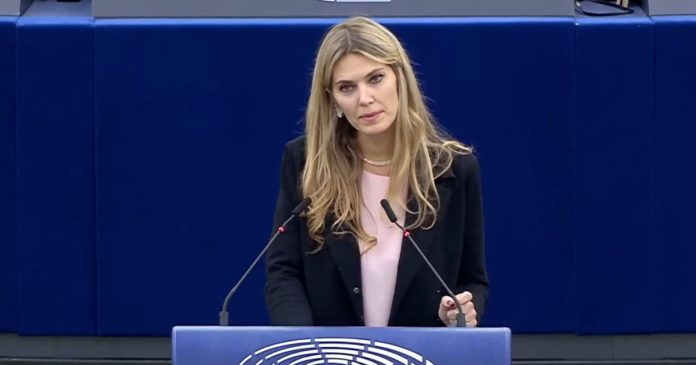 After being expelled from the Panhellenic Socialist Movement and suspended from the position of Vice-President of the European Parliament, Greece decided to freeze all assets of European Parliament Member Eva Kayli, who is being investigated in the context of the Qatari bribery investigation against Parliamentarians. Assistants in Brussels with his partner, assistant Francesco Giorgi, former member of the Parliament of the European Union, Antonio Panzieri, trade unionists Luca Visentini and Nicolo Vega Talamanca, Secretary General of the NGO “No Peace Without Justice”. Belgian media reported that during a search of her and her father’s home, 750,000 euros in cash in denominations of 20 and 50 euros were found: 600,000 euros in the suitcase brought by her father and the rest in the home of the MEPs. As anticipation grows for the words in the Strasbourg hall, which opened its session today, the former European Commissioner for Migration, Dmitros Avramopoulos, announces that he has resigned from the membership of the Scientific Council of the Fight Against Impunity Organization, the non-governmental organization headed by Panziri has ended up at the center of investigations of the Belgian Federal Prosecutor’s Office .

The provision of the Greek anti-money laundering authority relates to “bank accounts, treasuries, companies and any other financial assets,” Le Soir reports, quoting the head of the authority, Haralambos Vourliotis. The asset freeze also affects Kylie’s immediate family, like her parents. The Belgian newspaper adds that among the features of the authority is also a recently established real estate company in the elegant Kolonaki neighborhood of Athens, which was allegedly founded by the 44-year-old member of the European Parliament and her Italian partner.

Also among the suspects is a Belgian member of the European Parliament of Italian origin, Marc Tararabella, who declared in an interview with Le Soir newspaper that he “never received gifts from Qatar. I would have reported him.” His house was searched in the presence of the President of the European Parliament, Roberta Metsola, while the office of his former assistant, Giuseppe Meroni, who recently came under the control of Ppe MEP Lara Comi, is among the closed offices in Brussels of the ‘Eurochamber’ headquarters. Tarabella, Meroni, asserts that he also worked for two other Italian MEPs, Pietro Bartolo, and specifically, Lara Comi, and “worked for Mr. Panziri for many years. I can easily imagine that’s why the courts are interested in him.” , I don’t know whether you are a witness or not.” However, Tarabella assures that he knows Panziri well: “He was elected to the European Parliament from 2004 to 2019, we have been colleagues for a long time and, if the facts are true, it would be a great disappointment. He loves football, we watched the matches together and discussed the results of the weekend week, like many other fellows.

Then the member of the European Parliament dwells on his position on the Eurochamber in Qatar, which some of his colleagues considered very weak. “Qatar was awarded the World Cup in December 2010. I was one of the first to raise this objection, especially given the unenviable fate of expatriate workers. Then things began to develop positively in Qatar, and it is, for example, the only country in the region that canceled Kafala system. Everything is far from perfect, but I wanted to salute the progress that has been made by inviting Qatar to continue its efforts in this direction, “Tarabella stressed, echoing that he was last in Qatar last February” at the invitation of the National Human Rights Committee, with Many other parliamentarians, for an international conference on social networks and media.

See also  All the rules of tourism

However, the question is not solved only by those who are under investigation or as per requirements. This is an unprecedented corruption scandal within European institutions in recent years, and it undermines the reputation of the Italian group in the European Parliament, as well as the reputation of other formations. It is no coincidence that the sources within Eurochamber were also consulted by Ilfattoquotidiano.it confirms that the explanation immediately given by the insiders was that it was an “Italian-style scam” which, now, could have repercussions for the credibility of the representatives and also complicate the reform proposals brought from Rome to Brussels in different files. The temperature of the scandal will already be measured in the late afternoon, when the plenary session begins in Strasbourg, but attacks against the socialist wing are already arriving from the European People’s Party, whose representatives are known as “poisonous figures”. The danger is that there will also be confrontation within the socialist group. Raphael Glucksmann, MEP from the S&D Group, could ask the Engie Committee (on foreign interference) he chairs to deal with the issue in the next few hours. “It is time to prove that democracy is not for sale,” were his words on social media. It cannot be ruled out that one or more groups may request the inclusion of the subject in the Chamber’s agenda.

Among the first to comment on the investigation among European advisers, Germany’s foreign minister, Analina Berbock, arrived at the EU Foreign Ministers’ Council: “It is really an incredible situation and now needs clarification without whether, or what is required, in all the rigor of the law.” “Because it is also and especially about Europe’s credibility. There must be consequences in many areas, and now it’s about full clarity. We haven’t seen anything like this for a long time.” While the High Representative for Foreign Policy in Brussels, Josep Borrell, defined the news as “very worrying”, but “there is progress continuing” and we must wait for the outcome.

See also  'Where does he want to get out of the hospital,' alerted 007 already - Libero Quotidiano

‘Green Corridor is not required’, a severe blow to the Slovenian...