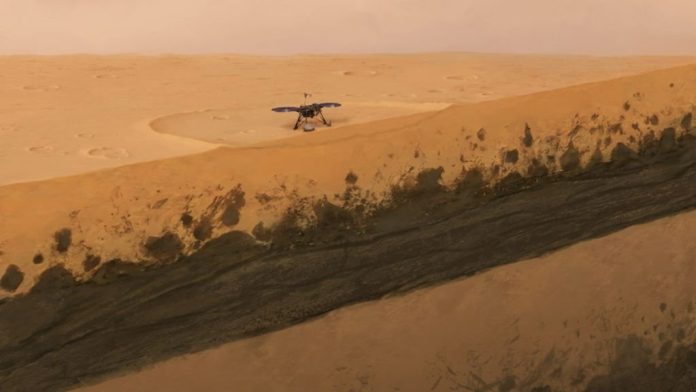 Since the landing of NASA’s unmanned probe InSight on Mars in November 2018, the probe has been using a seismometer – the Mars Seismic Service – to assess earthquake activities on the planet in order to draw conclusions about the planet’s internal structure.

In July, the ETH Zurich team, in collaboration with the Swiss Seismological Service (SED), provided rough insights, for example, into the thickness of Mars’ crust, the Martian mantle and the diameter of the liquid core.

Ambient noise instead of digging deep

However, structures close to the surface cannot be identified in this way, except by drilling. Meanwhile, researchers at ETH Zurich have taken an extra step: they used ambient noise on Mars (“ambient noise”) to determine local geology. This technique is used on Earth, for example, to see if the Earth’s interior is weakening or amplifying seismic waves. From this, the seismic hazard of a site can be determined and areas of unstable landslides on mountains or in lakes can be analyzed.

While there are many sources of noise available on Earth, Wind was the only remaining source of ambient noise for researchers on Mars.

Your geological findings They have now published the history of Mars at depths ranging from a few tens to two hundred meters in Nature Communications.

A detailed look under the surface of Mars

Unlike Earth, there has been no plate tectonic activity on Mars. It was formed by phases of active volcanic activity. Large areas were covered with basaltic lava plateaus. Analysis by ETH Zurich provides a detailed subsurface picture of the Insight landing site. The upper layer consists of three meters of sand (regolith) and loose rocks about 20 meters thick, which cracked due to meteorite impacts. Below are layers of lava flows that, according to the publication, covered the planet from 1.7 to 3.6 billion years ago.

The lava layers are divided by deposits located at a depth of 30 to 75 meters. The seismic image of the geological layer has allowed researchers for the first time to understand the most important geological events that have occurred at the InSight landing site on Mars during the past three billion years.