Persia Digest
Home science NASA’s test on a rocket to go to the moon achieves 90%... 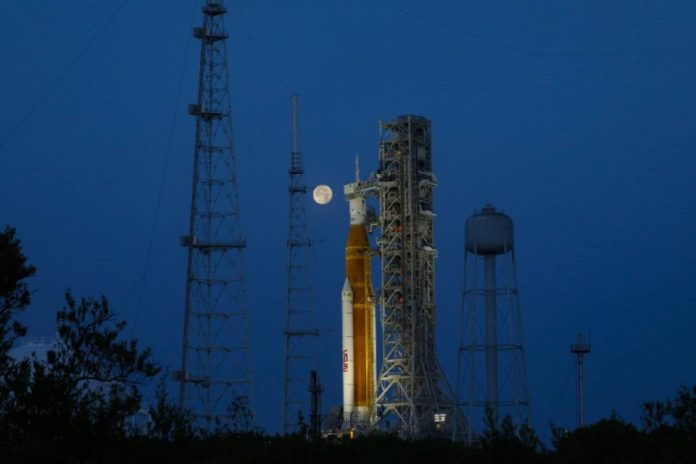 NASA’s fourth attempt to complete a critical test of the rocket it will send to the moon has achieved nearly 90% of its goals, officials said Tuesday, but a launch date has yet to be set.

This test is the last US space agency test ahead of this summer’s Artemis-1 mission: a lunar flight without passengers, which will then be followed by a capsule this time carrying humans but perhaps not before 2026.

Kennedy Space Center teams launched the test on Saturday. The goal: fill the tanks of the SLS rocket with liquid fuel, start the countdown to takeoff and simulate unexpected events, then empty the tanks.

Three previous attempts saw problems compounding and it was impossible to feed the rocket with hundreds of thousands of gallons of supercooled liquid hydrogen and oxygen.

On Monday, engineers were finally able to fill the tanks. But they also had to deal with a new hydrogen leakage problem that they couldn’t solve.

“I would say we’re occupying 90 percent of where we need to be overall,” Artemis mission director Mike Sarafin told reporters on Tuesday.

He added that NASA is still deciding whether it needs another rehearsal or whether it can be launched directly. The agency previously said an August window for Artemis-1 is possible.

NASA officials have repeatedly stressed that delays in testing new systems were common in the days of Apollo, for example, and that problems affecting the massive SLS rocket were not a major concern.

With the Orion capsule installed at the top, Block 1 of the SLS is 98 meters tall – taller than the Statue of Liberty, but slightly smaller than the Saturn V rockets that supported the Apollo missions to the Moon.

Artemis-1 is supposed to travel on the far side of the moon this summer during a test flight.

Artemis-2 will be the first crewed test, flying around the moon but not landing, while Artemis-3 sees the first woman and first person to land on the moon’s south pole.

NASA wants to establish a permanent presence on the Moon and use it as a testing ground for technologies needed for a mission to Mars in the 2030s.

Beware, Fake: Alleged AirPods 3 are being sold to neglected customers