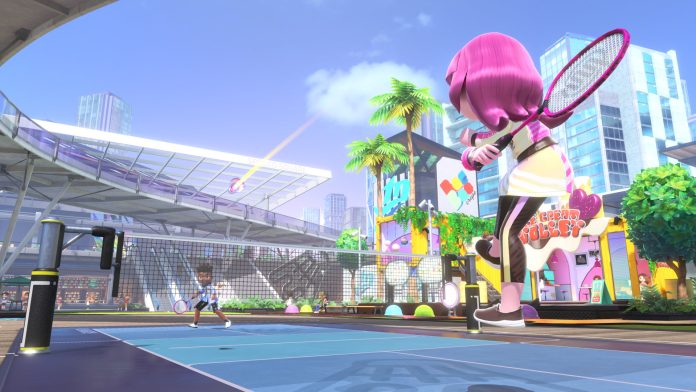 “Wii Sports” is a recent phenomenon of video game culture. With over 80 million copies sold, the sweaty little game collection remains the best-selling game for the Nintendo Wii. The combination of beginner friendliness and intuitive movement control make it a huge hit for the whole family. Since April 29, 2022, Nintendo brings you back to the virtual sports field: football, badminton or rather bowling? ‘Nintendo Switch Sports’ brings back fond memories of the classic game, but also sets new standards?

Fun for the whole family – now online too

“Nintendo Switch Sports” takes you to Spocco Square – the location of the six majors available at launch. You can choose between football, tennis, bowling, badminton, volleyball and chanbara. Golf will be added as the seventh sport in fall 2022. You tackle all disciplines alone or with friends on a split screen.

However, in the local multiplayer mode, the number of players is limited to two (eg in football) or four participants (eg in bowling). More participants require either too many Joy-Cons or too much space in front of the TV. Important: The multiplayer options only work in TV mode, not in manual mode. Moreover, “Nintendo Switch Sports” offers online support so you can compete with friends or strangers from all over the world.

Old magic in a new look

The game remains faithful to the principle of the likeness of its predecessor: thanks to its intuitive movement control, all sports can be learned quickly. Smaller tutorials and help texts explain the basic functions. With a little practice, all disciplines can be quickly mastered. However, some inaccuracies when querying movements remain noticeable and in sports such as volleyball the distances on the court are not always clearly recognizable due to the camera perspective.

The simple and charming graphic style perfectly fits this claim. However, this time you won’t necessarily have to play with your old Mii avatar, but rather create and dress up your gym buddy.

A colorful mix of specialties

The six sports available offer a good variety of different styles of the game. Football stands out here as you use both Joy-Cons to animate your athlete and camera. Actions such as shooting are performed by swinging the correct Joy-Con. For the powerful “Flugkopfbahn” movement, they extend both consoles forward. The course of the game is reminiscent of “Rocket League”, but it requires a lot of effort, especially at the higher levels of the three difficulty levels. It’s a pity: Until now, Nintendo Switch Sports supports the well-known leg strap from “Ring Fit Adventure” in penalty shootout mode, where you literally have to kick the ball into the virtual goal.

You only play tennis in doubles. As a solo player, you get to deal with both characters, which works surprisingly well. Other than that, the system offers fun ball sports in which the excitement arises, especially in the multiplayer mode, thanks to the different types of shots. Badminton is similar, but less versatile and therefore a bit boring. Volleyball isn’t perfect either. Here the game shows you the required movement, so the right timing is very important. However, the camera’s perspective is not always optimal for correctly estimating the position of the ball.

Chanbara replaces chests from Wii Sports. Here you hit your opponent with a colored bat and try to push him away from a platform in the water. Battles are more strategic than initially thought due to the countermechanisms. Very nice: with double blade and energy, variety plays thanks to special attacks.

Bowling is still a classic and plays just like it did in Wii Sports. By tilting the Joy-Con when you pull back, you cut the ball. In multiplayer mode, you can use split screen, so all players can clear pins at the same time or with a simple interval. In special mode, pass the ball away from the moving obstacles. More coordination and good timing are required here.