Persia Digest
Home entertainment Notre Dame de Paris: “We will not turn the cathedral into a... 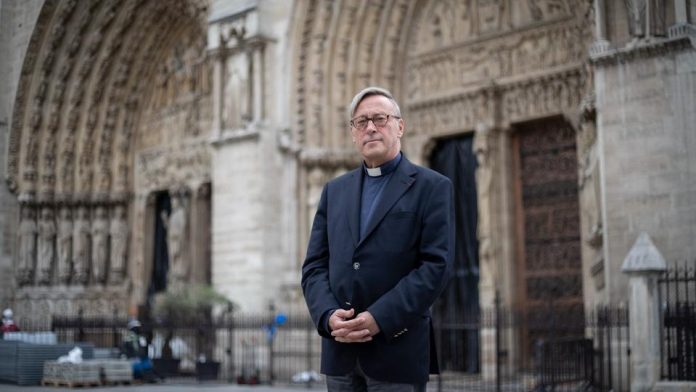 Nearly three years after the terrible fire that partially destroyed Notre-Dame de Paris, Monsignor Patrick Chauvet, dean of the cathedral, looks at the path he has taken since, in a book entitled “In the Heart of Notre Dame”, published this Thursday, March 10 in Editions Plon.

An intimate story in which the one person who has never left Notre Dame de Paris, whether after a fire or during a pandemic, evokes the relationship he has with the building, addressing topics such as friendship, silence and of course faith.

He speaks of a “rebirth”, that of the cathedral but also of his own: the high priest was ordinarily accustomed to addressing the crowd which, for months, remained not confined to silence but to the celebration of his offices before empty benches.

“What a long road, what adventures, what patience,” warns Monsignor Patrick Chauvet, who intends to take up the challenge “to re-open all this fundamental docking point, this central point from which France’s symbolically influence, influence and hopes emanate.” .

A path full of pitfalls, while in the beginning, the rebuilding of Notre Dame cathedral was unlocked by the architectural revolution. “Renovation projects […] Sometimes extravagance came to my office,” the dean of the cathedral recalls in his book. “And why there are no spas in churches and picnics for rollerbladers,” he jokes.

“I transferred all of these projects to a historical monument engineer who was choking and ripping his hair out,” he said again. Finally, it was the President of the Republic, Emmanuel Macron, who put an end to the controversy, by taking an official decision in July 2020 to rebuild Notre-Dame de Paris in the same way, as told by the Scientific Council.

Indeed, Archbishop Patrick Chauvet lists the major projects already launched in the course of the restoration of the Notre-Dame de Paris, chief among them the Return of the Great Mays, “this unique series of works of French painting from the seventeenth century. […] which must find a place in the great nave”, but also the restoration of the small chapels in the outpatients which you will find, according to the rector of the cathedral, “also have a luster”.

The same goes for the stained-glass windows, also called grisailles, which suffer no fire at all and which “once cleaned, will allow this unscented light to pass through,” assures the caretaker. Finally, “the completely destroyed furniture will undoubtedly be remodeled to create a more visible cathedral for the archbishop,” he warns.

According to his words, the vaults will be reconstructed symmetrically, just like the tower. The statues at the base of the tower, weighed eight days before the fire, have been restored and are eagerly waiting to be found, particularly the one representing Viollet-le-Duc in person.

“To Spice Up Notre Dame”

Monsignor Patrick Chauvet asserts that if the cathedral’s reception is also to be revised, so that the memorial can better accommodate 12 million visitors a year and avoid long queues, it is indisputable to turn it into a museum. The main thing is to make Notre Dame splendid, even if only for respect [les] Lots of donors.

“What a long way to go,” he still congratulated himself. And in conclusion: “We find our cathedral as we love it, with this youth and this beauty that will cross the centuries.”