Persia Digest
Home Tech Photographer captures a bright tail emerging from Mercury and surprises everyone on... 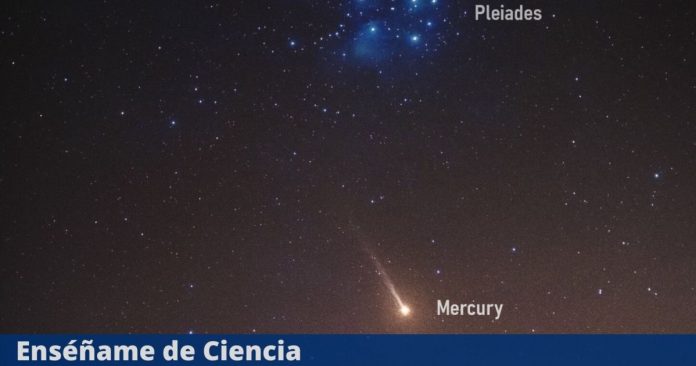 The image we appreciate here was taken a few days ago in La Palma, Canary Islands by German photographer Sebastian Voltmer who gave us an amazing shot of the night sky showing a very strange figure similar to the image we associate with a comet. They can be distinguished.Under the Pleiades, a group of stars is located in the constellation Taurus.

Vollmer posted his amazing photo through his social networks, and noted that “this is not a comet, not even a meteor, but the planet Mercury, which is currently very close to the Pleiades.” But how does this comet’s tail affect Mercury?

This is not a new feature of Mercury, its discovery dates back to 2001, and in subsequent years, NASA’s Messenger mission revealed more details about this effect. Astronomy enthusiasts probably know this peculiarity well, but for all the curious people who still don’t know why, here’s a simple explanation.

The effect is due to several factors, the most important of which is its location in the solar system, being the closest planet to the sun, it constantly receives radiation and the solar wind, in addition, Mercury has a small mass, and therefore, does not have a gravitational force or a significantly strong magnetic field, and this allows By releasing different atoms of the elements from its surface, as shown in Science alert.

In this way, it describes NASA That the surface of Mercury contains, among other components, sodium (Na) atoms, which are released from the surface into the planet’s atmosphere and into space due to two factors: propulsion provided by the solar wind and the effect of micrometeorites on Mercury. Once the sodium atoms are ejected, they are affected by solar radiation and provide the unique yellow-orange glow seen in the image; Specifically the atoms sent into space are the ones that make up the singular tail of Mercury.

See also  Dojos Rising, the sequel to the action game based on the popular Netflix series

Voltmer notes that Mercury’s orange-yellow sodium tail is about 2.5 million kilometers long. This effect is not visible to the naked eye, and in this way it can only be demonstrated with tools and techniques such as long exposure photographs. “This shot was only possible under the best viewing conditions and in combination with a special 589nm filter. For this photo, I was looking for a place in La Palma with the best view of the northwest. The highest point on the island is not always the best. I couldn’t believe it when I saw it A clearly defined tail on the raw photos. Wow!” Voltmer tells us.

Here is another stunning monochrome photo taken by Voltmer of Mercury’s tail with a special filter: