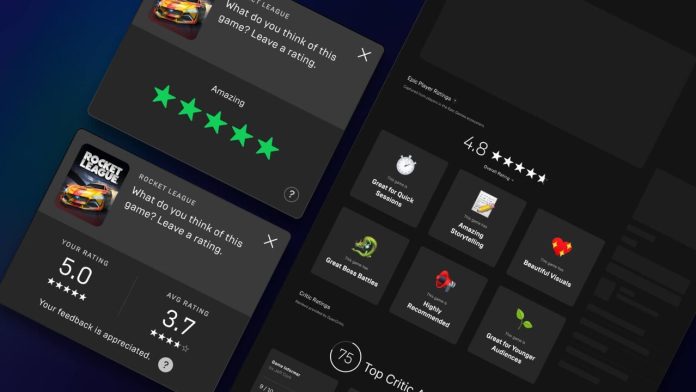 Games can now be rated on the Epic Games Store. The new ratings appear alongside the Open Critics Rating Summary. But Epic doesn’t let everyone have their say. Only randomly selected players are allowed to make a judgment.

After quitting the game, the provider will ask for feedback in the future launcher. However, not everyone is required and not always. The prerequisite is to play the game for at least two hours. This group is then chosen at random.

The selected people have the opportunity to rate the title with up to five stars. This approach differs significantly from that of other platforms, where each player always has the opportunity to rate each title. This regularly leads to “review blowouts”, giving negative ratings, for example due to copy protection or developers’ permissions. Such judgments will not indicate fun with the game, and therefore are not the basis for purchase recommendations, providers argue, although they can certainly be necessary to make a purchase decision. Stores work to achieve a balance between their economic interests and the interests of developers on the one hand, and the interests of customers on the other.

In the fight against this phenomenon, Valve, for example, significantly reduced it by a number of measures, including displaying the history of reviews and automatic detection of review explosion. On the other hand, Metacritic only allows user ratings with a time delay.

On the other hand, Epic does not rely on an open and unstructured approach and approaches the problem from the other side. Player selection aims to ensure that only people playing the game can rate and that there is no “bombing” of bad ratings. However, criticisms are also reduced by the fact that replaying the game if you don’t like it is only possible if you play for a maximum of two hours. The vast majority of reviews are written by those who consciously want to keep a product.

Also randomly, at the end of their sessions, players are given surveys about the last game played. Among other things, they ask if the title can be played “well in a group” or how difficult the bosses are. From the answers, Epic will derive the tags that will be added to the product page. It should help describe the characteristics of the game in more detail, and over time it also appears as a category in the store to enable more accurate searches. In addition, individual categories must be created based on the tags that are displayed on the home page of the store.