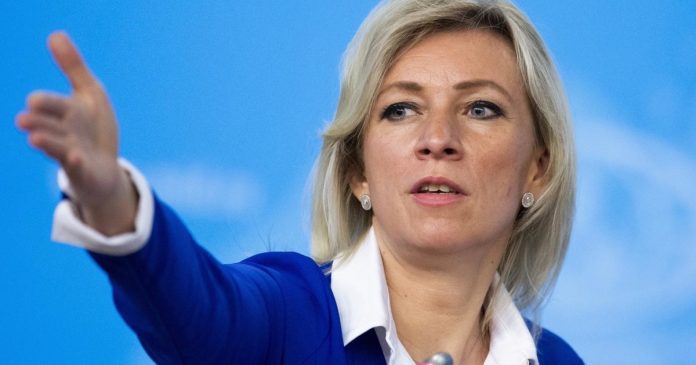 “Referendums in Ukraine are also legitimate for Italians.” Maria Zakharova, fired in Russian propaganda, introduces and thanks the Italian, German, Latvian and Venezuelan observers.

A referendum according to Zakharova accused President Zelensky’s government of shooting civilians in order to intimidate them and prevent the voting from taking place properly: “Despite the provocations of the Kyiv regime, which issued criminal orders to fire heavy artillery at crowded places, they are not afraid and express their will. The results speak for themselves: residents Donbass, Kherson and Zaporozhye do not want to return to their previous lives and made a conscious and free choice in favor of Russia. ”

After a long time, Zakharova rewrote history with the clear intention of reiterating that Russian President Vladimir Putin was forced to participate in the special liberation process: “Not everyone in Ukraine accepted the coup in Kyiv in February 2014, after which came the radical national forces, Which led to a bloody massacre of opponents in the southeast of the country.Even the signing of the Minsk Accords, approved by a decision of the UN Security Council, did not save the situation.

The population of Donbass was subjected to systematic and cynical extermination for eight years. The logical consequence of the anti-people policy of the Kyiv regime was the decision of the residents of Donbass, Kherson and Zaporozhye to seek protection from Russia.” But here is the most disturbing part of the fictitious report: “Referendums were conducted in full compliance with the rules and principles of international law – policy books -. The people of Donbass and southern Ukraine have exercised their legitimate right to self-determination in accordance with the Charter of the United Nations, the two International Covenants on Human Rights of 1966, the Helsinki Final Act of the Conference on Security and Cooperation in Europe of 1975, as well as the opinion of a court judge of 22 July 2010, confirming the fact that A unilateral declaration of independence by a state party does not violate any rule of international law. International observers from Italy, Germany, Venezuela, Latvia and other countries (a total of 133 people) also recognized the legitimacy of the findings. We thank experts, bloggers, foreign journalists and representatives of public organizations for their courage, honesty and objectivity.”

By Friday, Putin will announce the annexation, but the United Nations has already declared that it considers the masquerade referendums “illegal,” while the United States will present a resolution to the UN Security Council against the vote. In recent weeks, the Kyiv government, thanks also to Western weapons, launched a successful counterattack against the invader by retaking most of the territory occupied by Russian forces. Putin responded by declaring partial mobilization (a decree of martial law will be issued soon), threatening to use nuclear weapons and promoting referendums to include some Ukrainian regions in the Russian Federation (he won yes with 90% of the vote). Therefore, the conflict is increasingly inclined.

Pandora Papers, surveys in 9 countries The US is finding itself...