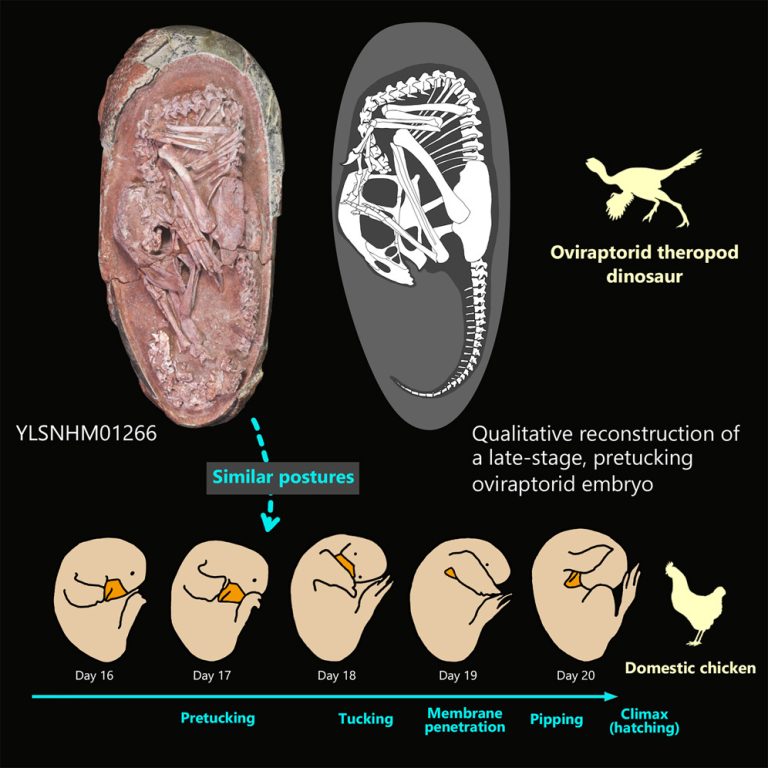 Well, it looks like we’re one step closer to getting our real life Jurassic Park. Researchers have found a well-preserved dinosaur embryo inside a fossilized egg. Named “Baby Yingliang,” this embryo is the embryo of a group of toothless theropods called oviraptorosaurs. Theropods are known for their bird-like feet. Scientists believe that modern birds descended from a group of smaller theropods.

Researchers at the Yingliang Group, a stone mining company, originally found the stone in 2000. At the time, they thought it contained egg fossils, but they put the find in storage for 10 years or so. When work began on the Yingliang Stone Museum of Natural History, researchers began sorting through the finds. Lida Xing, of the China University of Geosciences in Beijing, said museum staff first noticed bones in one of the cross-sections of a broken egg. (via CBS NewsThey found a dinosaur embryo hidden inside one of the eggs.

After its initial discovery, researchers began studying the embryo of the dinosaur. They found that they used a distinct poking position while they were hatching. Scientists previously believed that this position was unique to birds. This new information could establish the evolutionary path of modern-day birds from dinosaurs such as theropods. The researchers published their findings on the dinosaur embryo in the journal iScience.

Now that scientists have had time to study the embryo of dinosaurs, we know a lot about their hatching habits. For starters, this is the first time a fetus has been seen in a non-avian dinosaur. It is also one of the rare occasions that researchers have been able to find a dinosaur embryo in very good condition. Sure, we’ve found eggs throughout the past 100 years of exploration and digging, but rarely with such a preserved embryo.

For now, the dinosaur embryo will continue to be displayed at the Yingliang Stone Museum of Natural History. Researchers will continue to study the fetus in depth, to see if there is more we can learn about it. One thing the teams want to do is depict the creature’s internal anatomy. However, rocks still cover many parts of the body. Despite other fossil discoveries this year, this one is particularly exciting because of its rarity.

What we do know is that this is a huge step forward for archaeological discoveries. And researchers can use the information we’ve learned to study more fossilized dinosaur embryos. Now, all we need is a mad scientist who wants to take any DNA found in the egg and turn it into a real dinosaur and open an amusement park. Or – you know – we couldn’t do that.

NASA postpones the departure of two astronauts from the International Space...