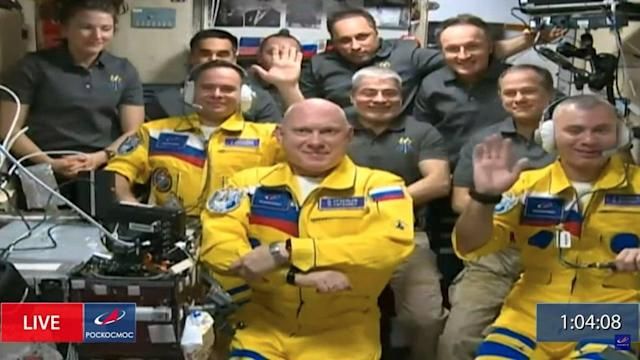 In fact, the use of the yellow suit is considered the norm. “Sometimes yellow is only yellow,” Roscosmos press service said on its Telegram channel, according to the agency. Reuters.

“The flight suits of the new crew are made in the colors of the emblem of the Bauman State Technical University in Moscow, where the three cosmonauts graduated … Seeing the Ukrainian flag everywhere and in everything is crazy.”

And Dmitry Rogozin, director general of Roscosmos, adds that he was even harsher, saying on his personal Telegram channel that Russian cosmonauts do not sympathize with Ukrainian nationalists.

At a press conference broadcast live from the International Space Station on Friday, veteran cosmonaut Oleg Artemyev, the mission’s commander, was asked about the suits.

“Each crew picks a different colour,” he said. “It’s our turn to pick a colour.” “The truth is we accumulated a lot of yellow fabrics, so we had to consume them. That’s why we had to wear yellow suits while flying.”

On Telegram, the Russian space agency Roscosmos explained that the suits were made six months ago and that the three cosmonauts chose the colors of their university. Rogozin also added: “These days, even if we are in space, we are with our president and the people!”.

See also  Those variants that come from Africa: "vaccinate them to save us"